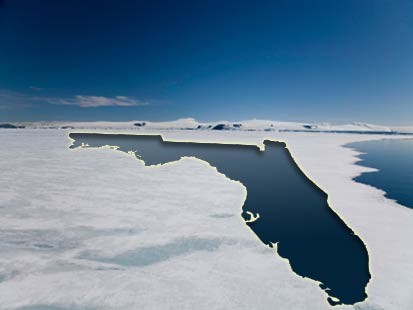 Scientists report that arctic ice the size of the state of Florida has melted in the last six days. (ABCNEWS)

An area of Arctic sea ice the size of Florida has melted away in just the last six days as melting at the top of the planet continues at a record rate.

2007 has already broken the record for the lowest amount of sea ice ever recorded, say scientists, smashing the old record set in 2005.

Currently, there are about 1.63 million square miles of Arctic ice, according to the National Snow and Ice Data Center in Boulder, Colo. That is well below the record of 2.05 million square miles set two summers ago and could drop lower before the final numbers are in.

In just the last six days, researchers say 69,000 square miles of Arctic ice has disappeared, roughly the size of the Sunshine State.

Scientists say the rate of melting in 2007 has been unprecedented, and veteran ice researchers worry the Arctic is on track to be completely ice-free much earlier than previous research and climate models have suggested.

“If you had asked me a few years ago about how fast the Arctic would be ice free in summer, I would have said somewhere between about 2070 and the turn of the century,” said scientist Mark Serreze, polar ice expert at the NSIDC. “My view has changed. I think that an ice-free Arctic as early as 2030 is not unreasonable.”

Sea ice melt will likely reach the absolute minimum in the next few days as temperatures at the North Pole cool and refreezing begins.

Melting sea ice, unlike land-based glaciers like the ones in Greenland and elsewhere, does not raise sea level. But it does play a major role in regulating the planet’s climate by affecting air and ocean currents.

“It will shift some of the weather patterns in ways that we are just beginning to understand,” said Robert Correll, a scientist who chairs the Arctic Climate Impact Assessment and is also the climate change director at the Heinz Center for Science, Economics and the Environment in Washington, D.C.

Correll said that white sea ice also acts as a mirror at the top of the planet, reflecting much of the sun’s energy back into space. As it melts, it reveals darker water that absorbs more energy from the sun — further warming the ocean in a process scientists call a “feedback.”

“If there is no ice, the ocean is going to continue to heat, and that is going to accelerate the global warming process,” said Correll.

Last week, the United States Geological Survey issued a report that found if the ice continued to decline at the current rate, two-thirds of the world’s polar bear population will disappear by 2050.

“Our results do give me some concern,” said Steve Armstrup, a Polar Bear Project Leader with the USGS. “In Northern Alaska, where I’ve been working for these years, there may not be polar bears. So as Polar bears go, that probably reflects to a great extent a lot of things that are happening to other organisms in the Arctic system.”

The melting ice is also opening up the fabled Northwest Passage, long-sought by explorers and shipping companies as a short cut between Europe and East Asia.

Historically, that debate has been largely theoretical because the passage has been frozen and impassable. But in August, satellite images showed the passage has now become more navigable than ever, fueling a hot debate between the United States and Canada over who should control it.

At a summit last month in Montebello, Canada, the leaders of the two nations expressed their disagreement.

“Canada’s position is that we intend to strengthen our sovereignty in the Arctic area, not only military, but economic, social, environmental and others,” said Canadian Prime Minister Stephen Harper.

The latest satellite image shows a clear, wide path running through the Arctic that has major implications for global commerce.

For example, ships that must currently go around South America’s Cape Horn because they are too big to traverse the Panama Canal could save about 10,000 miles out of their shipping route.

The passage also saves about 5,000 miles when shipping between Europe and Asia.

Canada, the United States and Denmark are also competing for resources as melting Arctic ice reveals potential deposits of oil and gas.

A mini-submarine placed a Russian flag at the North Pole last month in a symbolic claim to that country’s share of Arctic resources.

Environmental groups worry that increased traffic through the Arctic could put the natural resources in jeopardy if there is an oil spill or other disaster in the remote region.