According to YNet, a leaflet was handed to Jews in Donetsk, Ukraine, ordering them to register their religion and property or be deported. The claim is that this came from the pro-Russian faction in Donetsk, but that allegation has been vehemently denied by Russia.

Fear replaced communal atmosphere in Donetsk’s Jewish community as armed men handed out a leaflet Passover eve calling on Jews register their religion and property with the interim pro-Russian government or face deportation and loss of citizenship.

Via IBTimes: The Denial

The role of Right Sector in post-revolution Ukraine was exploited by Russia to justify its intervention in Crimea, arguing that Kiev had been taken over by fascists and neo-Nazis. Russian president Vladimir Putin said the Maidan uprising had been hijacked by Jew-haters and Nazi sympathisers.

UPDATE: Pushilin has denied the Novosti Donbassa’s report and assured reporters that the flyer is not from his organisation.

Russian President Vladimir Putin may not be a boy scout, but as an ex KGB war expert, there is no way he is this stupid, this is obviously an attempt by the West to turn the tide in the Ukrianian conflict……. or is it?  Is Putin actually arranging things so he can now come in and save the day and “save the Jews.” 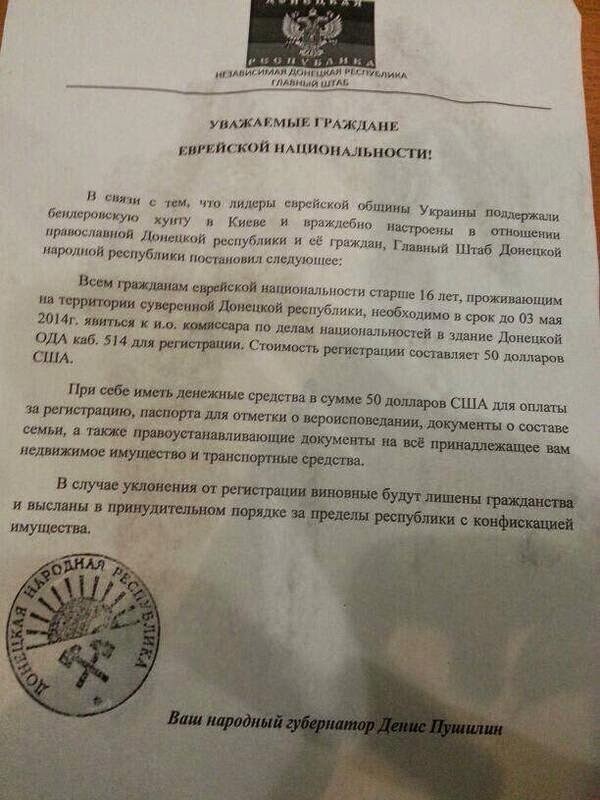