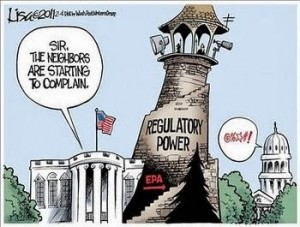 A Wyoming family is being threatened with massive fines for building a stock pond on their eight-acre farm.

Andy and Katie Johnson built the pond in 2012. They stocked it with trout, ducks, and geese.

Of course, the government is why we can’t have nice things. Naturally, the EPA has found a reason to come around and harass the Johnsons and prevent them from enjoying their property.

Johnson said the EPA has engaged him in a power play and is threatening him with massive civil and criminal penalties over the pond, which they claim is actually a “dam.”

The agency claims Johnson violated the Clean Water Act by building a dam on a creek without a permit from the Army Corps of Engineers. Further, the EPA claims that material from his pond is being discharged into other waterways. Johnson says he built a stock pond — a man-made pond meant to attract wildlife — which is exempt from Clean Water Act regulations.

Johnson said that his pond is exempt from the law, and he followed state regulations in building it. He has an approval letter from the Wyoming State Engineer’s Office as proof, which states:

“Said permit is in good standing and is entitled to be exercised exactly as permitted,” says the letter.

The agency is threatening to hit the family with up to $75,000 a DAY in fines. Johnson said he’s not paying them a cent:

“I have not paid them a dime nor will I. I will go bankrupt if I have to fighting it. My wife and I built [the pond] together. We put our blood, sweat and tears into it. It was our dream.”

Of course, the EPA isn’t backing down. They argue that Johnson needs to either restore the land or pay the fines. On January 30, the agency gave Johnson 30 days to hire a consultant to assess the impact of the supposed unauthorized work and to create a restoration proposal. That proposal has to be approved by the EPA, of course, and it must contain a schedule. All work would have to be completed within 60 days of the plan’s approval.

Sounds like they are setting him for failure, doesn’t it? Even if he DID violate the law and agreed to make things right, would meeting those terms even be possible?

If Johnson does not comply with those terms, the EPA is going to fine him $37,500 per day in civil penalties, along with $37,500 more every day for statutory violations.

Johnson is fighting back and has gained the support of three Republican senators – John Barrasso and Mike Enzi, who both represent Wyoming – and Louisiana Sen. David Vitter, Fox News reports:

The Republican lawmakers sent a March 12 letter to Nancy Stoner, the EPA’s acting assistant administration for water, saying they were “troubled” by Johnson’s case and demanding the EPA withdraw the compliance order.

“Rather than a sober administration of the Clean Water Act, the Compliance Order reads like a draconian edict of a heavy-handed bureaucracy,” the letter states.

The letter also questions the EPA’s claim that Johnson’s pond is actually a dam:

“Fairness and due process require the EPA base its compliance order on more than an assumption,” they wrote. “Instead of treating Mr. Johnson as guilty until he proves his innocence by demonstrating his entitlement to the Clean Water Act section 404 (f)(1)(C) stock pond exemption, EPA should make its case that a dam was built and that the Section 404 exemption does not apply.

“If the compliance order stands as an example of how EPA intends to operate after completing its current ‘waters of the United States’ rule-making, it should give pause to each and every landowner throughout the country.”

Johnson said his battle with the EPA is serving as a learning experience for his children:

“This is showing them that they shouldn’t back down. If you need to stand up and fight, you do it.

“This goes a lot further than a pond. It’s about a person’s rights. I have three little kids. I am not going to roll over and let [the government] tell me what I can do on my land. I followed the rules.”

The infringement on Johnson’s property rights under the veil of protecting the environment is bad enough, but some say that the astronomical fines are perhaps an even bigger issue – and may even be unconstitutional, as Evan Bernick of The Foundry explains:

But the eye-popping aspect of this story is the severity of the penalties threatened. It’s absurd to threaten someone with tens of thousands of dollars in fines because he or she lacks a permit. And it might also be unconstitutional.

The Framers of our Constitution recognized that, at a certain point, penalties become unconstitutionally disproportionate. The Eighth Amendment’s Excessive Fines Clause reflects that understanding. In Austin v. U.S. (1993), and again in U.S. v. Bajakajian (1998), the U.S. Supreme Court explained that “[t]he Excessive Fines Clause limits the government’s power to extract payments, whether in cash or in kind, as punishment for some offense,” and held that civil sanctions that do not serve solely remedial purposes are subject to the Excessive Fines Clause. It is impossible to understand the threatened fines as serving a purely remedial purpose–surely, repairing any damage that Johnson inflicted would cost less than $75,000 a day. But, under the terms of the CWA, he is potentially subject to such penalties as a consequence of his failure to obtain a permit.

This is just another sad case of big government stomping all over the little guy. Hopefully the EPA won’t get away with destroying the Johnsons’ hard work and are stopped from sending the family into financial ruin.