When Lucmane DÃ©lille, Port-au-Prince’s district attorney, summoned former President Jean-Bertrand Aristide to appear before him on Wednesday, Jan. 9 to answer patently frivolous complaints, it caused a great awakening of the Lavalas masses, alarming those in Haiti and abroad who thought it was time to behead Aristide’s party, the Lavalas Family.

Indeed, tensions ran high that day when thousands of Aristide’s supporters massed outside the courthouse where Aristide was summoned to appear before DÃ©lille at 10 a.m.. Similar outpourings took place in Haiti’s major cities like Cap HaÃ¯tien, GonaÃ¯ves, and JÃ©rÃ©mie. However, when the prosecutor saw the crowds, he decided, at the urging of Aristide’s lawyers, to go meet with the former head of state at his home in Tabarre, on the northern outskirts of the capital.

When the crowd heard that news, the thousand of demonstrators marched, jogged, and ran from the courthouse to Aristide’s home, about four miles away. 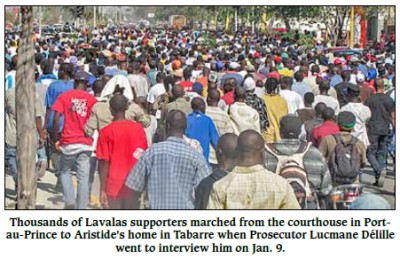 What exactly happened at Aristide’s home?

DÃ©lille told journalists that he had a cordial conversation with Dr. Aristide. The conversation was very brief, no more than 30 minutes. There was a massive police presence. Not since his return to Haiti on Mar. 18, 2011 after seven years in exile had so many police officers been mobilized to provide Aristide security. It appears that day was the first time that district attorney DÃ©lille realized that he was dealing with a former head of state and that meeting with Aristide posed a security problem.

DÃ©lille also pretended that he interviewed Aristide. But, according to a reliable source who was at the meeting, DÃ©lille’s assistant, Paul Eronce Villard, conducted most of the interview. There was also in DÃ©lille’s delegation a senior official of the Justice Ministry whose name was not revealed.

This raises an important question: who was the Justice Ministry employee, and why was he there?

Aristide’s lawyers were also present: Mario Joseph, Dabia Jean LunÃ¨s, Camille Leblanc, JoÃ«l Petit-homme, Newton Saint-Juste, and Guy CÃ©sar. According to them, the meeting was very cordial. DÃ©lille’s team displayed no arrogance and did not conduct the meeting as an interrogation or hearing.

Aristide’s lawyers said they took the opportunity to object to the proceeding. DÃ©lille was acting on two complaints, the first that Aristide was responsible for the losses some people incurred after investing in a cooperative bank which failed during his time in office. One lawyer argued that “a head of state cannot be aware of a contract between two private individuals.”

The second complaint was brought by Sony ThÃ©lusma (Ti Sony), who, as a child, had lived at Lafanmi Selavi, an orphanage Aristide ran in the 1980s. ThÃ©lusma, who was allied with pro-coup forces in the years before the Feb. 29, 2004 putsch against Aristide, claimed that his former mentor raised money for the orphanage which was then misspent on political projects. The lawyers said that there is no evidence whatsoever to support that claim and that Fanmi Selavi fed and housed hundreds of poor street children.

Despite the cordiality and the lawyers’ objections, DÃ©lille sent the case to an investigating judge, the equivalent in Haitian law of convening a grand jury. The investigating judge can choose to proceed with the prosecution or dismiss it, or even to have Aristide arrested.

Many parliamentarians have strongly criticized DÃ©lille and the government for their action. Senators MoÃ¯se Jean Charles, John JoÃ«l Joseph, and Jean-Baptiste Bien-AimÃ©, among many others, said that the questioning of Aristide amounts to political persecution carried out by the government to undermine the Lavalas Family leader. Sen. Bien-AimÃ© said that President Michel Martelly and Prime Minister Laurent Lamothe fear that the power and popularity of the Lavalas Family would hurt them in upcoming elections and that they had to do everything to discredit and destroy Aristide’s popularity. Meanwhile, Sen. Jean-Charles accused Martelly of instigating the legal proceedings against Aristide. Other parliamentarians called on DÃ©lille to resign.

“This is a real spectacle that we’ve witnessed this Wednesday in Port-au-Prince,” Duret said. “A magistrate must operate in compliance with the law and legality. Once the standards are not met, there is automatically a risk of hurting oneself. Prosecutor DÃ©lille’s conduct in the case of the former priest of St. John Bosco continues to sully the institution and as a result the judicial system itself.”

The big question is this: are DÃ©lille and the Martelly/Lamothe regime really trying to uphold justice and the rule of law by embarking on this adventure?

Martelly, showered with accusations that he is behind Aristide’s prosecution, denies it. However, Aristide’s supporters point to a growing number of legal anomalies and “dirty tricks” under his administration: the November 2011 arrest of Deputy Arnel BÃ©lizaire, despite his parliamentary immunity; the unlawful arrest and imprisonment of 21 Lavalas supporters hours after a Jan. 1, 2013 demonstration; the release from jail of Martelly’s Special Adviser, Calixte Valentin, who murdered Octanol DÃ©rissaint before numerous eye-witnesses; the alleged involvement of National Palace security chief, Marc-Arthur PhÃ©bÃ© in the Clifford Brandt kidnapping ring; and finally the case of JosuÃ© Pierre-Louis, the hand-picked president of Martelly’s contested Permanent Electoral Council, who is credibly accused of raping a subordinate.

Despite the alarm and outcry of his supporters, Aristide continues to preach peace. “Honor and respect for each person who is making a big sacrifice by marching under the hot sun for democracy to give justice and peace,” Aristide said in a statement issued after the demonstration outside his home. “Honor and respect for that great patriotic sacrifice. I’d like to embrace each of my sisters and brothers who were in the crowd, but unfortunately that is not possible. Allow me to tell you ‘thank you’ while I renew my engagement to always remain faithful to you all. Haiti, our mother, is thirsty for peace for her children. In mutual love, we will continue to protect that peace so that every Haitian, without distinction, lives with peace in his head and in his stomach.”

The massive mobilization to defend Aristide certainly surprised DÃ©lille. Anxiety and disappointment were clearly visible on his face as he stood before television cameras after the meeting in Tabarre.

Meanwhile, Lavalas militants, some of whom had been divided by secondary differences, were energized and emboldened by their massive show of unity on Jan. 9.