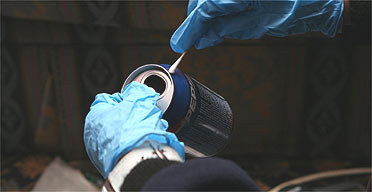 A forensic police officer swabs a drinks can for DNA. Photograph: Graham Turner

The Home Office is considering giving the police the power to take a DNA sample on the street, without taking the suspect to a police station, as well as taking samples from suspects in relatively minor offences such as littering, speeding or not wearing a seat belt.The move comes as an official genetics watchdog prepares a public inquiry into the police national DNA database, following concern over the retention of samples from people acquitted of any offence, and disclosure that the database holds DNA records for one in three of British black males.The database is the largest in the world, with 3.4m profiles, more than 5% of the UK population. If the powers are granted, it would expand massively.

Baroness Kennedy, chair of the Human Genetics Commission, said the power of the police in England and Wales to take DNA samples from any arrested individual without requiring their assent was unrivalled in the world. “We want to ensure the public voice is heard on issues people think are relevant. The Citizen’s Inquiry is likely to grapple with issues such as whether storing the DNA profiles of victims and suspects who are not charged, or who are subsequently acquitted of any wrongdoing, is justified by the need to fight crime.”

She added that under law it was very difficult, and sometimes impossible, to have your sample removed. “On the other hand a steadily increasing number of serious crimes, including murder and rapes, are being solved and criminals brought to justice with its help. It is likely that the use of DNA information by police authorities for criminal intelligence purposes will grow. It is therefore vital that the public are able to voice their views.”

The inquiry will recruit representative panels of the public to consider social and ethical issues in police use of DNA.

The initiative comes as the Home Office finishes consulting on police powers to extend use of the DNA database, with a view to legislation this autumn. The results show wide support from the police to take DNA, fingerprints and footwear impressions on the street to confirm identity and check against the national database, and support to lower the threshold to take in suspects in minor offences. A Home Office paper summarising the consultation said respondents “welcomed the ability to reduce the threshold, including to the extent of allowing for the taking of fingerprints, DNA and footwear impressions for non-recordable offenses for the purpose of offender identification and searching databases”.

It adds: “The second issue relates to the taking of fingerprints, photographs and samples on the street. This was welcomed at an operational level as a means of increasing officer confidence in knowing who they are dealing with and enabling them to deal more effectively with the incident at the scene.”