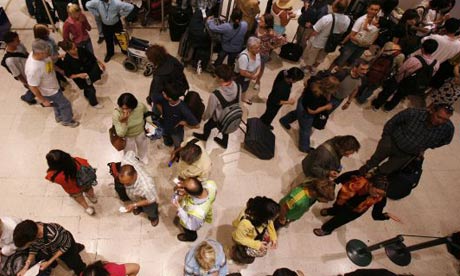 Airline passengers will be monitored at every stage of their journey under the proposals. Photograph: David Levene

Passengers travelling between EU countries or taking domestic flights would have to hand over a mass of personal information, including their mobile phone numbers and credit card details, as part of a new package of security measures being demanded by the British government. The data would be stored for 13 years and used to “profile” suspects.

Brussels officials are already considering controversial anti-terror plans that would collect up to 19 pieces of information on every air passenger entering or leaving the EU. Under a controversial agreement reached last summer with the US department of homeland security, the EU already supplies the same information [19 pieces] to Washington for all passengers flying between Europe and the US.

But Britain wants the system extended to sea and rail travel, to be applied to domestic flights and those between EU countries. According to a questionnaire circulated to all EU capitals by the European commission, the UK is the only country of 27 EU member states that wants the system used for “more general public policy purposes” besides fighting terrorism and organised crime.

The so-called passenger name record system, proposed by the commission and supported by most EU governments, has been denounced by civil libertarians and data protection officials as draconian and probably ineffective.

The scheme would work through national agencies collecting and processing the passenger data and then sharing it with other EU states. Britain also wants to be able to exchange the information with third parties outside the EU.

Officials in Brussels and in European capitals admit the proposed system represents a massive intrusion into European civil liberties, but insist it is a necessary part of a battery of new electronic surveillance measures being mooted in the interests of European security. These include proposals unveiled in Brussels last week for fingerprinting and collecting biometric information of all non-EU nationals entering or leaving the union.

All airlines would provide government agencies with 19 pieces of information on every passenger, including mobile phone number and credit card details. The system would work by “running the data against a combination of characteristics and behavioural patterns aimed at creating a risk assessment”, according to the draft legislation.

“When a passenger fits within a certain risk assessment, he could be identified as a high-risk passenger.”

A working party of European data protection officials described the proposal as “a further milestone towards a European surveillance society.

“The draft foresees the collection of a vast amount of personal data of all passengers flying into or out of the EU regardless of whether they are under suspicion or innocent travellers. These data will then be stored for a period of 13 years to allow for profiling. The profiling of all passengers envisaged by the current proposal might raise constitutional concerns in some member states.”

The Liberal Democrat MEP Sarah Ludford said: “Where is this going to stop? There’s no mature discussion of risk. As soon as you question something like this, you’re soft on terrorism in the UK and in the EU.”

Britain is pushing for a more comprehensive system based on the experience of a UK pilot scheme that has been running for the past three years. Officials say Operation Semaphore, monitoring flights from Pakistan and the Middle East, has been highly successful and has resulted in hundreds of arrests.

The scheme has seen one in every 2,200 passengers warranting further investigation, with a tenth of those “being of interest”. British officials say rapists, drug smugglers and child traffickers have been arrested and want the EU scheme to cover “all fugitives from crown court justice”.

But Ludford said: “If you ask the UK government how many terrorists have been picked up, I don’t think you get a very straight answer.”

EU officials have asked the Home Office minister Meg Hillier for information about the arrests of suspected terrorists.