The bidding process for contracts worth up to £500m each to run the UK’s identity card scheme has been launched. 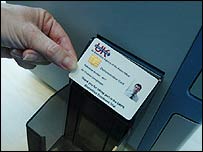 Five firms will be chosen to supply computer equipment and manage the application and issuing of cards.

The government said it was an “important milestone” in delivering the £5.3bn scheme, which will see ID cards issued to UK residents in 2009.

The smallest contract will be for £50m, while two are expected to be worth up to £500m.

These are thought to be some of the most expensive ever awarded by the government and will run for up to 10 years.

A host of firms, including IBM, Accenture, BT and Fujitsu services, are expected to bid for the contracts.

In June, Home Office minister Liam Byrne said the ID card scheme would become a “great British institution” on a par with the railways in the 19th century.

The government says the change is needed to fight terrorism, illegal immigration, people-smuggling and identity fraud.

But opponents, including the Conservatives and Liberal Democrats, have questioned the cost and effectiveness of ID cards, and argue that they will damage civil liberties.