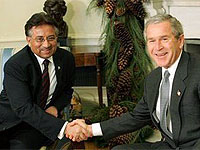 The outlook is looking increasingly gloomy for democracy in Pakistan. Our erstwhile ally in the war on terror, General Musharraf is looking worse by the day.  After he took power in a bloodless coup in 1999, many Pakistanis were hopeful about the future.  They were happy to be rid of a corrupt leader and willing to take a chance on Musharraf.  Polls indicate, however, that they have soured on his leadership. And it’s not surprising why. After having regularly promised free and fair elections, Pakistan’s electoral efforts have fallen short.  Musharraf’s seems to have a messiah complex and his justifications for his actions seem increasingly weak. Moreover, Musharraf’s alliance with the US has also hurt him with the Pakistani public that is increasingly skeptical of the war on terror. For the Pakistani public the “war on terror” is just considered a convenient excuse for further autocratic rule.

The New York Times reported that Musharraf caught word that the Supreme Court was about to issue a unanimous decision invalidating his recent election. Of course, Musharraf wasn’t about to let that meddling court have its way. He had learned his lesson in his tussle earlier this year with the Chief Justice. He therefore dismissed the court and we’re left today with an increasingly isolated and unpopular leader who justifies his continued abrogation of the constitution on the spurious grounds that it is necessary to combat terrorist elements. Sound familiar?   I wonder if in a one on one meetings with President Bush, they exchanged notes on using the “terrorist”  threat to bypass constitutional controls on power.

Of course, the U.S. is in a bind here. President Bush has publicly declared that democratic governance is the long term answer to overcoming violent extremism. It can give hope and dignity to oppressed people around the world who might otherwise choose terrorism. I agree that certainly it is a component of the solution – a very long term solution. However, this long term solution comes into conflict with our short term dilemma that Pakistan is ground zero on the war on terror.  After 9/11 Musharraf signed onto the coalition of the willing and has been rewarded handsomely in terms of massive infusions of aid. The results of Musharraf’s alliance have been mixed.  Certainly Pakistan’s assistance has led to the arrest and detention of high value targets and Pakistan’s support of our Afghanistan mission has been important. However, at the same time, Pakistan’s inability to control its own territory and reign in the Al Qaeda elements in the country have made many wonder whether we are getting our money’s worth.

It’s really a question here of short term vs long term interests. Unfortunately, in the past we too often have tended to focus on short term results and ignore the potential blowback from those actions. Just think back to the struggle in Afghanistan against the Soviets in the 1980s. Back then the US backed the mujahideen which, after the end of the Afghanistan conflict, led to the formation of Al Qaeda. The U.S. followed the old maxim, my enemy’s enemy is my friend. That sort of short term thinking contributed to the development of Al Qaeda and the foreign policy quagmire we find ourselves in now.

Flash forward now to the current situation in Pakistan. We can either support a dictator who has declared himself our friend against Al Qaeda (our once friend turned enemy), or we can support the long term stability of the country through the building of democracy.

The tragedy here is that this is just one example of the U.S. ignoring the potential blowback of its decisions – think U.S. support of Iraq against Iran…. or U.S. support of right wing dictators in Latin America who stood up against communism.

It’s time that we stood up for democracy. It can be messy, and it may mean short term losses, but in the long run, this will be the more effective bulwark against Islamic extremism.

What does this mean in Pakistan? Well, for one, we should get serious about withholding the massive budgetary supports we provide to the Pakistani government until elections are confirmed and Musharraf agrees to step down from his military position. The Bush administration seems to be trying to take both side on this.  Yesterday the President recounted a phone call during which he pressed the general on these two issues. However, just a day before,  Deputy Secretary of State John Negroponte said that Musharraf was an “indispensable” ally on the war on terror. With that kind of “diplomatic pressure” I wouldn’t be surprised if Musharraf calls our bluff.

Some critics argue that if Musharraf falls, we won’t like what takes his place. However, this paper argues just the opposite. We must not ignore the lessons of the past. Although maintaining support for Musharraf may lead to short term stability, if we’re interested in long term gain, I’d rather put by my money on democracy. It’s hard and it’s messy, but it’s the best way out of this mess.