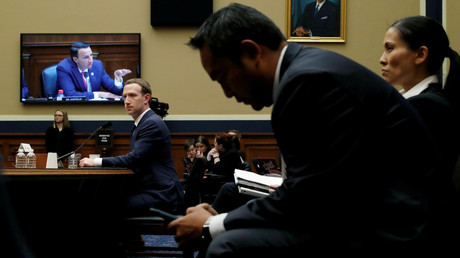 Mark Zuckerberg seemed to have an easy time at his appearance before Congress on Tuesday, thanks to senators that seemed clueless about technology.

Zuckerberg employed the services of consultants and even created a mock questioning session to prepare to face a joint hearing of the Senate Commerce and Judiciary Committees, but, thanks to many senators’ apparent confusion about the basics of technology, perhaps Zuckerberg did not need to try so hard.

Mark Zuckerberg is now living out every young person’s worst nightmare: trying to explain how tech stuff works to the nation’s elderly

#Zuckerberg starts spewing technical lingo that these senators do NOT understand. It makes him SOUND smart & like he’s answering the question. The senators don’t want to look dumb by challenging him, so advantage to Zuck.🙄

Congress’ ignorance was not lost on the public, as evidenced by the many tweets mocking the senators’ stumbling. Their questions allowed Zuckerberg to portray himself and his company as “idealist and optimistic,” giving the impression that both Zuckerberg and his 25,000 employees simply stumbled into multiple privacy debacles over the years.

Senator Orrin Hatch’s (R-Utah) question to Zuckerberg on how he sustains a business model “in which users don’t pay for your service?” earned the most mockery online, largely due to Zuckerberg’s inability to hide his smile after replying: “Senator, we run ads.”

“Senator, we run ads” is my new T-shirt.

Senator Lindsey Graham (R-South Carolina) was mocked online for asking Zuckerberg: “Is Twitter the same as what you do?” However, this was part of a line of questioning about Facebook’s monopoly.

Lindsey Graham, given chance to ask Facebook CEO anything:

Asked by Graham whether Facebook was a monopoly, Zuckerberg said: “It certainly doesn’t feel that way to me.”

The issue with Facebook is its monopoly power. All of the privacy violations and problems, like fomenting genocide in Myanmar, flow from its use of power to lock-in users, harvest data, and profit through discrimination while controlling an essential communications facility.

While Zuckerberg may not ‘feel’ like his company is a monopoly, Facebook’s 2.2 billion users across the world dwarf other social media networks. It also owns one of other the most popular social media sites, Instagram, along with messaging app, WhatsApp. The three companies own 77 percent of mobile social traffic.

‘I’m not sure I fully understand’

Senator Brian Schatz (D-Hawaii) told Zuckerberg: “Your terms of service, people have no earthly idea what they’re signing up for.”

“You sign up for Facebook, you get ability to share your information with people,” Zuckerberg said in a response that both states the obvious and avoids the point.

Zuck’s “testimony” is a joke. “I’m not sure I understand that well enough to answer your question” says the guy that claims he made Facebook! This dog and pony show is serving only the ignorant people that need placating.

Schatz then asked whether private messages are informing the ads people see and whether browsing habits and likes are being collected, to which Zuckerberg claimed: “I’m not sure I fully understand this.”

Shatz then showed his ignorance by asking: “If I’m emailing within WhatsApp, does that inform your advertisers?”

‘We have an app called Messenger’

Senator Roger Wicker (R-Mississippi) asked Zuckerberg whether it was true that “Facebook collects call and text histories from Android phones?” This was in reference to recent reports that Facebook has been collecting phone history and text message data through its Messenger app. Since the Cambridge Analytica fallout, many users have been downloading their Facebook data, which included folders of their call history.

“We have an app called Messenger,” Zuckerberg explained. “That app offers an option to sync text messages.” That opt-in also includes phone contacts and call history, as Facebook itself explained a few weeks ago.

Senator Dean Heller (R-Nevada) also asked if Facebook collects the content of phone calls, to which the CEO and founder responded: “I don’t believe so. We do have messenger, which can import texts.”

‘Not familiar’ with ‘Russian propaganda’

Senator Patrick Leahy (D–Vermont) came armed with a poster showing a number of Facebook pages and asked whether they were Russian propaganda.

“Senator, are you asking about those specifically?” Zuckerberg asked. “I’m not familiar with those pieces of content,” he added.

Hmm, Senator Patrick Leahy having his assistant hold up a poster board with the pictures of Trump, Putin, and the Confederate flag alongside a picture of Dr. Jill Stein is a bit underhanded of ‘Corporate’ Democrats in manipulating the national psyche of America — shame on him.

Not all senators stuck to basic questions. Senator John Thune (R-South Dakota) did point to a Wired article detailing the company’s “14-year history of apologizing for data privacy,” and asked Zuckerberg why we should trust Facebook to ensure privacy.

Zuckerberg responded that the company had made mistakes, but that “we try not to make the same mistakes multiple times.” However, Facebook’s history of doing just that suggests otherwise.

“I’m concerned how much FB values trust and transparency. You’ve been asked several critical questions for which you don’t have answers: browsing activity, tracking devices, who’s your biggest competition; storing up to 96 categories of data; did you know Kogan’s TOS allowed sale of data. You knew about 87 million 27 months ago, but the decision was made not to notify. Did anyone at FB have a conversation, at the time you became aware of this breach, wherein the decision was made not to contact the users?”

Zuckerberg said he did not know if there were conversations within Facebook about this, and, when pressed about the decision not to inform users’ their data was breached, Zuckerberg said: “in retrospect, we clearly view as a mistake.”