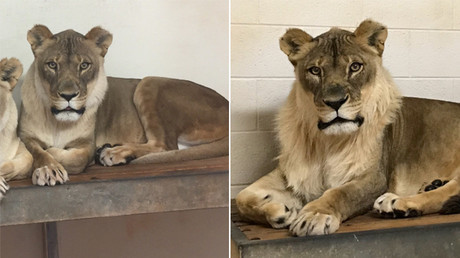 Zoologists at Oklahoma City Zoo are scratching their heads after an elderly lioness suddenly sprouted a healthy looking mane around her head and neck.

The ‘exceptionally unusual’ spurt of fur in the 18-year-old African lioness, called Bridget, has left zookeepers baffled. Male lions develop manes at about one-year-old which are a product of increased production of the hormone testosterone.

Veterinary staff at the zoo first began to notice a change in its long-term resident last year. The mane developed over a nine-month period. No other male characteristics have been noticed in Bridget.

A blood sample has been taken from the lioness and will be compared with samples from Bridget’s 18-year-old sister Tia, who remains maneless. No other change has been detected in Bridget’s health but staff will continue to monitor her condition. Followers of the zoo have chimed in trying to solve the “curious case” of the lioness mane, with suggestions ranging from hormone imbalance to diet.

While it’s unusual for female lions to develop characteristics of a male it’s not entirely unheard of. In 2014, a group of five lionesses in the wilderness of Botswana were observed with manes and demonstrated male-like behaviours. Researchers put the behavior down to a genetic component as the lionesses came from the same pride and developed the manes at a young age.

Meanwhile, in 2011, a 13-year-old lioness at the National Zoo in South Africa began developing a mane. An issue with her ovaries resulted in excess testosterone production and once that was resolved, the mane receded.

Another factor that could also cause mane growth is a benign tumor located on the adrenal or pituitary gland, as these regulate hormones like testosterone. Bridget falls into the “geriatric” category of lions – the median life expectancy for lions is 16.9 years, according to the Association of Zoos and Aquariums (AZA).