The murder of 17 people at Marjory Stoneman Douglas High School in Parkland, Florida, on February 14 has sparked protests and marches for gun control, led by many of the Parkland teenagers who experienced the horror of the massacre. The students have taken an outspoken stance against the National Rifle Association and the politicians it funds.

In response, some gun advocates pulled out a familiar rhetorical tool: accusing shooting victims of being paid “crisis actors,” pretend victims supposedly employed by left-wing boogeymen like George Soros to drum up support for gun control and other progressive policies. Victims of past mass shootings, including Newtown, Sutherland Springs and Las Vegas, had earlier been accused of participating in “false flag” attacks designed to justify federal gun control. These preposterous claims have subjected the families of the victims of those tragedies to death threats and harassment from hoaxers and conspiracy theorists.

Seventeen-year-old David Hogg was one Stoneman Douglas Student singled out for crisis actor accusations. An account named “mike m” reposted a YouTube video of a CBS Los Angeles clip that featured Hogg recounting a verbal altercation with a lifeguard in 2017, when he was living in Redondo Beach, California. Captioned “DAVID HOGG THE ACTOR,” the video set off waves among far-right internet circles, who saw it as proof that Hogg had already graduated from high school in California, and thus was an imposter. 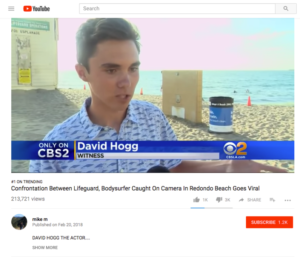 Citing the fact that Hogg’s father was a former FBI agent—something Hogg brought up on CNN (2/19/18)—conspiracy theorists accused him of working alongside the Bureau, ominously observing that the FBI failed to preemptively apprehend the Parkland shooter after he posted numerous threats on YouTube comment threads.

YouTube took down the “mike m” video—after it received over 200,000 views and appeared on the website’s “trending” page. However, right-wing and conspiracy-oriented news sources and activists had already picked up the story and run with it. A former congressmember and a Pennsylvania state representative fanned the flames. Even Donald Trump Jr. liked tweets connecting the massacre to the FBI, which is currently investigating his father. While some sources didn’t come out and endorse false flag/crisis actor conspiracies outright, they used the typical rhetorical devices used to drum up paranoia, claiming they were “just asking questions” or “connecting the dots.”

America’s leading right-wing conspiracy-monger, Alex Jones, did much to spread the hoax that Hogg was a crisis actor. Numerous videos about supposed “inconsistencies” in accounts of the shooting—including coverups and multiple shooters—have also appeared on his popular YouTube channel (currently the 16th most popular News and Politics channel on YouTube, with over 2.2 million subscribers) and other YouTube channel affiliates that repost content from Jones’ InfoWars website.

YouTube has increasingly become a haven for conspiratorial far-right media sources. Outlets like the New York Times Magazine (8/3/17) and Salon (8/13/17) have noted the upswing of hoax-laden right-wing videos on the Google-owned website in recent years, comparing the reach of reactionary opinion on YouTube to that of talk radio, long a mainstay of ultraconservative discourse. While radio hosts like Rush Limbaugh, Glenn Beck and Michael Savage indoctrinated older demographics in conspiratorial right-wing politics in recent decades, right-wing YouTube videos serve the same purpose for younger age groups.

“Conspiracy theory” is often a loaded term. The Merriam-Webster definition is:

A theory that explains an event or set of circumstances as the result of a secret plot by usually powerful conspirators.

Of course, this definition could cover legitimate political critique as well as blatant falsehoods. For example, if you explain business-friendly regulations as the result of corporations funneling massive amounts of money to politicians through SuperPACs and lobbying groups, are you a “conspiracy theorist”? Clearly not, as there is substantial evidence proving your claim’s veracity. Relevant political critique can more usefully be delineated from what are called “conspiracy theories” by the latter’s use of false, dubious and misleading evidence. Alex Jones and his acolytes could not advance their clearly bogus theories—like ones involving crisis actors, the claim that 9/11 was an inside job, and the idea that John Podesta and Hillary Clinton ran a child prostitution ring out of a DC pizza restaurant—without a willingness to make logical leaps, accept as valid any confirmatory evidence and reject as “part of the plot” any information that calls their beliefs into question. Funnily enough, Jones often walks back his conspiracy theories after they have been debunked, but not before his videos have made their rounds and left impressionable people believing their lies.

Jones maintains a facade of professionalism, with his snazzy studios and upscale production values, that other conspiracy theorists lack; the format of most hoax-propagating right-wing videos is usually just a person talking at the camera from their office, living room or car, or provocative news clips interspliced with incendiary narration intended to shock viewers. Like their talk radio counterparts, the YouTube right homes in on familiar right-wing punching bags: the purported evils of political correctness, social justice warriors, immigrants, Antifa, Black Lives Matter, Islam, feminism, transgender rights, “cultural Marxism” and, as we have seen in the case of David Hogg, gun control. Their videos leave little room for context, nuance or factchecking, and frequently devolve into gross conspiratorializing.

These far-right conspiracy videos insulate viewers in reactionary content bubbles through YouTube’s “suggested content” algorithm. The algorithm is centered on bundling viewers into neat “identity” groups that the platform can then market to advertisers. Since 2012, YouTube’s algorithm has done this by focusing on the amount of time watched per video, rather than number of clicks, on both channels and videos, thereby rewarding videos that attract dedicated viewers rather than quick samplers. Additionally, keywords, tags, descriptions and titles help videos get noticed and suggested by the algorithm, so having a set of buzzwords like “social justice warriors” helps get related videos into viewers’ suggested video queue. 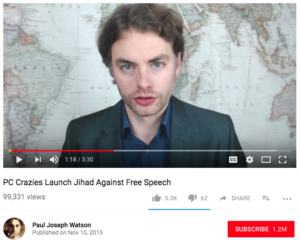 By targeting a specific demographic (say, the lucrative white males aged 14-34 demographic) with ads based on an identity profile built by monitoring the keywords and the amount of time an individual watches specific videos, YouTube can generate more clicks on the accompanying ads and in turn drive the costs of ads up. And this streamlined targeted advertising is lucrative: According to Brightcove, 74 percent of consumers have said that watching videos on social media affects their purchasing decisions, while the average consumer watches almost an hour of “social” video a day, half of which takes place on YouTube. With YouTube’s financial incentive to bring viewers more of the same kind of content, a trip down the right-wing conspiracy theory rabbit hole is specifically built to ensnare people, primarily young males, who might be lonely, alienated, politically naive or just in search of alternatives to mainstream corporate media sources.

YouTube has taken steps to ban some far-right users for spewing conspiracy theories or racist rhetoric. The website recently removed a video on the Alex Jones Channel titled “David Hogg Can’t Remember His Lines in TV Interview,” which claimed “it’s about a 90 percent chance” that the Parkland shooting was a false flag, and insinuated that Hogg was “coached” by “the deep state” for a CNN interview. YouTube also told Jones that he had received his “first strike,” warning of a potential termination from the website if he accrues two more violations of the YouTube content policy within the next three months.

Recently, YouTube notified Jones that advertisers were fleeing his channel after a CNN study (3/3/18) alerted them that their ads were appearing alongside his videos. Painting himself as a victim of a censorship campaign against right-wing media sources by more centrist media, Jones claims that his longtime enemy CNN has been actively lobbying YouTube to ban InfoWars.

Yet the libertarian-influenced free-speech stance maintained by many big Silicon Valley tech platforms, like Twitter, Facebook and YouTube, is frequently applied only selectively, and is seemingly more favorable towards the far right. People have been banned on content platforms for much less than  genocidal Nazi chanting or smearing massacre victims as hired actors. For example, Twitter has locked users for swearing at people with “verified” accounts, Facebook has locked or banned users who post pictures of breastfeeding and Black Lives Matter activists who have called white people racist, and both YouTube and Facebook have, at the behest of the Israeli government, de-platformed Palestinian journalists and activists documenting brutality of Israeli soldiers.

Conversely, the content platforms frequently drag their feet on banning Nazis and conspiracy theorists that run afoul of their content policies. YouTube banned Nazi group Atomwaffen from their website, following an article by the Daily Beast (2/26/18), but only after repeated refusals to do so.

Recently however, large tech platforms like YouTube have shown a new willingness to shift towards a tougher approach in enforcing their content policies with the addition of displaying Wikipedia articles alongside conspiracy theory videos and with crackdowns against Nazis. However, Sam Levin of the Guardian (2/28/18) argues that taking down conspiracy theory videos and potentially banning users like Jones from their platforms only reinforces their narrative that the “deep state” conspiracy is persecuting them to silence “the real truth.” Additionally, when the left acts as cheerleaders for political censorship, or deputizes a company like Google to move against a particular group, these tactics can backfire when the same censorship is used against them. Indeed, it’s likely that a mandate to censor conspiracy theories could end up targeting legitimate structural critiques of power that are misleadingly grouped into the same category. Asking Google, perhaps the most powerful corporate entity in the world, to become the arbiter of what is and isn’t a conspiracy theory is certainly not ideal for healthy political discourse. The moral panic among Democrats about the influence of “fake news” during the 2016 election provides a stark example of similar potential blowback.

Still, real life exists outside the internet: Conspiracy theories peddled by the far right can incite real-world harassment and violence. This harassment has not come without reprisal: Jones has been sued for defamation by Brennan Gilmore, a former State Department foreign services officer who was attacked by Jones as a “deep state operative” after he caught the horrific murder of Heather Heyer by a Nazi on camera during the Charlottesville “Unite the Right” rally. 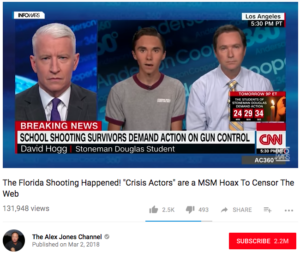 Conspiracy theories and challenges against the “official narrative” have long been fixtures in the paranoid style of American politics. InfoWars continues to release conspiracy theory videos on YouTube that receive millions of views. One of Jones’ latest videos, “The Florida Shooting Happened! ‘Crisis Actors’ Are a MSM Hoax to Censor the Web,” now denies that the shooting was a false flag, but maintains that the mainstream media is using the massacre as a tool to promote gun control and censor right-wing internet “truth tellers.”

Conspiracy theories such as these are unlikely to dissipate any time soon, especially while the internet remains a useful tool for spreading disinformation to the masses, and while content suggestion algorithms like YouTube’s provide financial incentives not to stop them. While deputizing YouTube to silence Alex Jones and his ilk is an approach that is likely to have negative consequences, it is still necessary for both public and media to continuously call out blatantly false conspiracy theories peddled by the right.

One group that is not afraid to challenge the conspiracy-mongers: the Parkland survivors themselves. It’s refreshing to see David Hogg and others striking back against those who have smeared them. Jones has of late gone on Twitter to beg Hogg to tone down his attacks, pleading with him to come on his show.