The Russian Embassy in the UK has issued a tongue-in-cheek challenge to a British journalist who said that Russian spacecraft were still operating with Soviet technology less powerful than an Apple smartphone.

“Almost nothing the Russians use to go into orbit has changed since the collapse of communism. They have updated the computers on their best rocket, the Soyuz, but it still has less computing power than an iPhone,” journalist Giles Whittell wrote in his Sunday Times profile of Tim Peake, Britain’s first spacewalker, emphasizing the dangers he faced during his ascent to the International Space Station.

“Perhaps Giles Whittell should then try to fly into space using his iPhone, not an ‘outdated’ Soyuz,” fired back the embassy’s Twitter account. 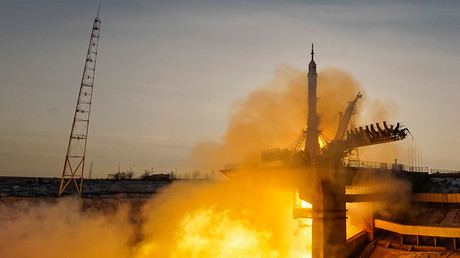 Curiously, in the article, Whittell says that Tim Peake himself, who flew on the Soyuz in 2015, “is a fan of Baikonur [cosmodrone], or at least of the Soviet technology it represents.”

“They overengineer everything, and the Soyuz is the same. It’s like a tank. It’s by far the safest and most reliable means of getting to space,” Peake said.

Over its history, the Soyuz rocket has been launched into space over 1,500 times, with a success rate of 97 percent. The attached Soyuz capsule that carries the crew has never failed to deliver its astronauts to the International Space Station, where it has been the only means of ferrying crews to and fro since the retirement of the Space Shuttle in 2011.

While the Soyuz shuttle is actually in its fourth iteration, it deliberately maintains the same fundamental design, as during its first launch in 1966, due to its track record of reliability, simplicity and good value. So even if it uses computers with less power than an iPhone, it is not because Russian engineers cannot put an iPhone inside the Soyuz, and make it run the launch software.