In the US, activists mostly harass and intimidate those disagreeing with the liberal agenda, former congressman Ron Paul told RT. He said tensions are rising despite Republicans and Democrats sharing many similar traits.

“If people don’t agree with the liberal elements, they can be harassed and rushed off. Rights are being abused,” the libertarian politician stated. “A lot of us are hoping it doesn’t get violent.” 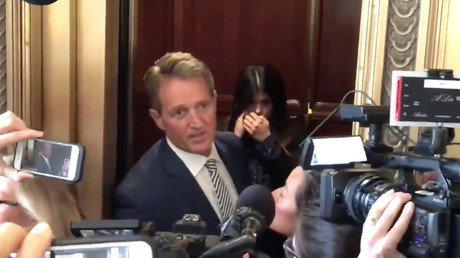 This is true not only during the street protests, Paul noted, but also at college campuses where liberal and left-wing campaigners have been trying to shut down and chase away conservative speakers. On several occasions, their tactics led to intense scuffles and even riots. Loud activists have also been ambushing politicians and government officials during off-duty hours and surrounding their offices. High-profile figures like Senator Ted Cruz (R-TX) and Homeland Security chief Kirstjen Nelsen were driven out of restaurants, while Senator Jeff Flake (R-AZ) was cornered and shouted at in an elevator.

The activists are getting “very angry and aggressive,” Paul remarked. “There is a lot of hostility between the groups. It brings out intolerance in people instead of trying to bring people together.”

The former congressman, who now leads think tank, the Ron Paul Institute for Peace and Prosperity, argues that despite the growing tensions, two leading US parties don’t have “tremendous difference in philosophy.”

“The policies are very similar. There’s lot of bipartisanship when it comes to passing legislation, like running up the deficits and getting involved in foreign wars,” Paul said. He believes the hostility exhibited by the activists toward opponents is more of a “cultural thing,” which is partially rooted in an inability to cope with Democrats losing the presidency to Donald Trump two years ago.

“We should have a ‘second party.’ We have Republicans and Democrats which are basically the same. They argue over power and personalities,” Paul told RT. “We need a real opposition party.”

Paul pointed out that among the things that the two leading parties are aligned on is Wall Street. According to him, the main reason for the recent major dip in US stock market prices is that for the last 10 years the Federal Reserve issued a “massive amount of credit which causes the distortions, malinvestment, and the debt.”

“This is a bipartisan thing: Republicans and Democrats want the Fed there to print [all] this money.”

Earlier, President Trump reacted to the stocks’ plunge by saying that Fed had “gone crazy” about raising interest rates.

Ron Paul believes that the Federal Reserve shouldn’t be the one to settle the interest rates at the first place. “That can only be decided by the free market.”