The National Aeronautics and Space Administration is honoring the legacy of its farthest reaching spacecraft by sending a Twitter message to the 40-year-old probe. Voyager 1 has traveled almost 13 billion miles from Earth.

Voyager 1 was launched on September 5, 1977, a few weeks after Voyager 2 launched in August. After traveling through space for 40 years, the spacecraft has made it nearly 13 billion miles from Earth, according to NASA’s Jet Propulsion Laboratory.

In 2012, Voyager 1 became the first man-made object to leave our solar system and enter interstellar space, and Voyager 2 became the longest-operating spacecraft in history. Voyager 1 is now traveling at speeds of more than 38,000 miles (about 61,155 kilometers) per hour and has traveled so far from Earth that it takes light from Earth more than 19 hours to reach the spacecraft. 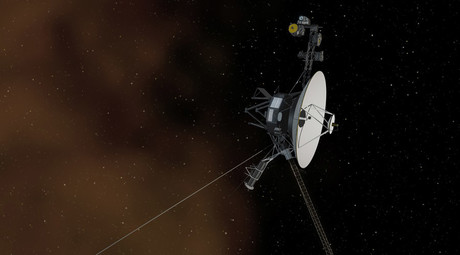 After 40 long years of traveling in space, NASA still has the ability to communicate with the twin Voyagers every day.

“It’s amazing that the two spacecraft are still working after 40 years. When we launched, the Space Age itself was only 20 years old, so this is an unparalleled journey, and we’re still in the process of discovering what’s out there,” Ed Stone, a Voyager project scientist since the mission’s inception in 1972, said in an interview with Space.com on the 40th anniversary of Voyager 2.

The Voyager mission was officially completed in 1989 after the twin Voyagers “visited more planets, discovered more moons, and imaged more unique places than any other spacecraft in NASA history,” the agency said in a statement.

During their Grand Tour, the spacecraft became the first to explore all four giant planets in the outer solar system. They captured more than 33,000 pictures of Jupiter and its five major satellites, including the first known images of active volcanoes outside of Earth on the Jupiter moon Io. They also captured the first images that revealed the complexity and variety of the structure in the Saturn ring systems. The probes are also the only spacecraft to capture close-up images of Uranus and Neptune.

In 1990, Voyager turned around and took the first ever portrait of the solar system. The image showed Earth as “a pale blue dot,” according to Dr. Carl Sagan, a member of the Voyager imaging team.

“Look again at that dot, That’s here. That’s home. That’s us. On it everyone you love, everyone you know, everyone you ever heard of, every human being who ever was, lived out their lives… on a mote of dust suspended in a sunbeam,” Carl Sagan said.

Voyager 1 carries a 12-inch gold-plated phonograph record that includes sounds, pictures and messages from Earth. The record contains spoken greetings in 55 different languages, 115 images encoded in analog form, 19 audio tracks of the various natural sounds from Earth, and 90 minutes of music including 27 different tracks from different cultures and eras.

The outward facing cover of the record also contains messages engraved on the surface, with instructions that detail the correct way to play the record and a map that shows the location of our solar system with respect to 14 pulsars.

To honor the 40th anniversary of Voyager 1, NASA invited the public to submit short, uplifting messages with the hashtag #MessageToVoyager. The winning message was picked from more than 30,000 messages to be transmitted to the space probe, where it would join the messages that have been carried on the golden record for 40 years.

“We offer friendship across the stars. You are not alone,” the message says.