Federal regulators announced they are rolling back regulations on “bomb trains,” arguing they are too costly. Under the rules, trains carrying high explosive liquids were supposed to have electronically-controlled pneumatic brakes by 2021.

The US Department of Transportation said it will rescind the mandate for the pneumatic brakes in an updated impact analysis ordered by Congress earlier this week.

“After careful review in accordance with the Congressional mandate contained in the FAST Act, the Pipeline and Hazardous Materials Safety Administration (PHMSA) and the Federal Railroad Administration (FRA) will rescind the ECP mandate,” the DOT said in a statement.

FRA said that, after careful review, the National Academy of Sciences determined “it was unable to make a conclusive statement regarding the emergency performance of ECP brakes relative to other braking systems.”  The federal agency said the costs of the mandate “would exceed three-fold the benefits it would produce.”

Industry officials reacted positively to the news. The rollback is a “rational decision,” Chet Thompson of the American Fuel and Petrochemical Manufacturers, said in a statement.

In 2016, a Union Pacific train derailed in the Columbia River gorge near the small town of Mosier, Oregon, spilling 42,000 gallons of crude oil and sparking a massive fire that burned for 14 hours. 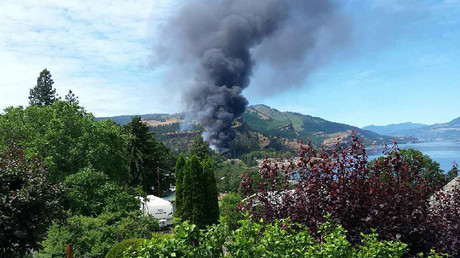 “We’re definitely frustrated that the Trump administration is weakening standards that are not strong enough to being with,” Dan Serres, conservation director with Columbia Riverkeeper, told KOMO News. “We saw that with the Mosier derailment, potentially if there was a better braking system in place, we wouldn’t have seen so many cars come off the tracks.”

It took 141 oil derailments and fires in 2014, before the Obama administration decided to devise new rules in May 2015 for trains. The regulations introduced new tank car standards for oil and ethanol, and mandate the use of electronically controlled brakes.

“The truth is that 99.9 percent of these shipments reach their destination safely,” DOT Secretary Anthony Foxx told the press at the time. “The accidents involving crude and ethanol that have occurred, though, have shown us that 99.9 percent isn’t enough. We have to strike for perfection.”

The new rules were anticipated to cost the industry $2.5 billion over the next two decades, according to DOT estimates.

The oil cars’ distinctive black, torpedo-shaped tanks filled with flammable crude oil have given them the moniker of “bomb trains.” They carry up to a million of barrels of oil a day.