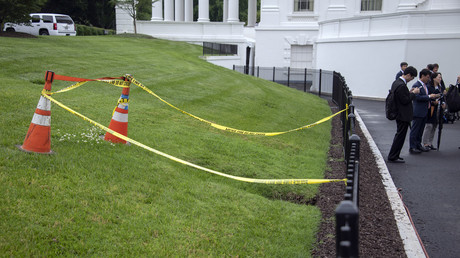 A sinkhole has opened up near the White House press briefing room on the north lawn, prompting a wave of derision online as social media users revelled in the unique karma of the event.

During his election campaign, Donald Trump famously vowed to “drain the swamp” in Washington. Of course, the city itself was actually built on a swamp and, owing to its unique geology, is expected to sink by as much as six inches in the next century.

The #sinkhole isn’t from Me. It’s from Satan. It’s his way of telling Trump the contract is expiring.

While DC’s swampy foundations have created several sinkholes in recent years – even swallowing an entire school bus in one instance – this is the first to strike the White House.

Many Twitter users were quick to point out that Trump’s Mar-a-Lago resort was also the victim of a giant sinkhole in 2017, though that was caused by the installation of a new water main.

The sinkhole outside the office of Deputy Press Secretary Hogan Gidley has been cordoned off and covered up by White House staff, reportedly the groundskeepers.

According to Jenny Anzelmo-Sarles, a spokeswoman for the US National Park Service, the sinkhole first appeared Sunday, May 20. She also confirmed that the sinkhole does not pose any risk to the White House itself.

However, geological facts and the lack of a sinkhole-related threat to the presidential premises weren’t enough to deter the Twitterati from enjoying the moment with a slew of wry puns, GIFs, and memes.

A #sinkhole is forming in the front lawn of the White House because at this point even the grass wants out.