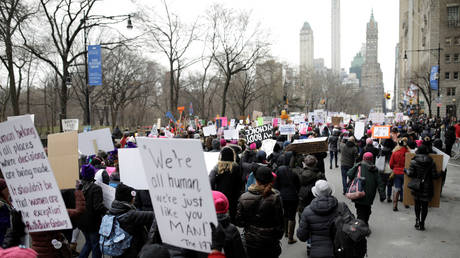 Right-wing activist Laura Loomer broke onto the stage during Women’s March in New York, accusing the event of anti-Semitism.

Conservative firebrand Loomer made her way to the main stage as Agunda Okeyo, the director of the Women’s March New York City, was giving her opening remarks. She approached the speaker and attempted to hold on to the mic.

The Women’s March, first held after President Donald Trump’s inauguration, has previously been accused of anti-Semitism over the organization’s ties with Nation of Islam leader Louis Farrakhan. One of its initial organizers, actress Alyssa Milano, even disavowed the movement for that.

The event, which mainly promotes liberal causes, is held in Washington and as well as other US cities and this year reportedly drew much smaller crowds than in the first two years.
Loomer is no stranger to staging a protest. Banned from Twitter for her attacks on Rep. Ilhan Omar , she handcuffed herself to the tech company’s headquarters entrance protesting against social media censorship of right-wing voices and crashed into House Speaker Nancy Pelosi’s estate over immigration.