It’s not just Congress that’s seeing more and more female faces as of late. Women have taken control of the US’ multibillion dollar military-industrial complex too. Who said that war is only a man’s business?

With the 116th Congress being hailed as the most diverse and most female one yet, the rise of the empowered woman has left few sectors of business and government untouched and now extends to the US’ cosy-cosy club of arms manufacturers and their government procurers.

Politico celebrated this “watershed” moment on Wednesday, announcing that as of January 1, the CEOs of four of the nation’s top five defense contractors – Northrop Grumman, Lockheed Martin, General Dynamics, and Boeing’s defense wing – are now women. The latest appointment was of Kathy Warden as CEO and president of Northrop Grumman. 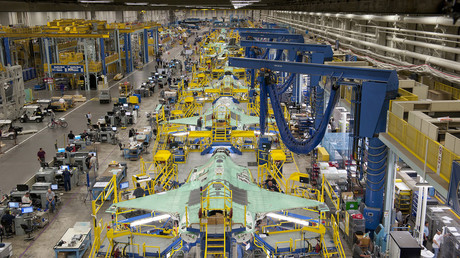 In government, the Pentagon’s top weapons buyer, the State Department’s weapons seller, the Department of Energy’s nuclear weapons chief, and the secretary of the Air Force are all women.

The waging of war and building of weapons have long been male-dominated fields. However, with government more and more open to women, and the STEM fields campaigning to even out the almost 80-percent male graduation rate, the current crop of female arms makers and buyers is part of the trend too.

“If I ask everyone in this room to think about the most protective person you know in your life, someone who would do anything to keep you safe, half the people in this room would think about their moms,” Air Force Secretary Heather Wilson told the House Armed Services Committee.

“We are the protectors; that’s what the military does. We serve to protect the rest of you, and that’s a very natural place for a woman to be.”

With US-made weapons responsible for thousands of deaths worldwide – including a conservative estimate of almost 250,000 civilians in Iraq and Afghanistan over the last two decades and dozens of schoolchildren in Yemen – the irony of Wilson’s feelgood statement was not lost on some Twitter commenters.

“The way intersectional feminism is going right now, we’re going to have a very diverse group of war criminals and capitalist patriarchs,” one wrote.

YES LADIES! You can now equally annihilate entire cities with a press of a button…just like men…because it is 2019 & WOMEN ARE FREE#MilitaryIndustrialComplex is now on equal representation & equal pay..woohoo..how about you ladies celebrate by dropping a bomb on my family? pic.twitter.com/JxTrmANVNZ

No matter the gender of the person at the reins, the US maintains a military presence in some 177 countries worldwide, and the Department of Defense has an annual budget of almost $700 billion. War is big business for America’s defense manufacturers too. Lockheed Martin, Boeing Defense, Northrop Grumman and General Dynamics made a combined $56 billion in the third quarter of 2018 alone.