Passengers aboard a United Express flight travelling from San Francisco to Boise, Idaho, were in for a rude awakening after an “unruly passenger” attempted to open the cabin door mid-flight to everyone else’s bemusement.

Despite the incident, the flight kept its course without declaring an on-board emergency. All 73 passengers aboard the plane were unharmed.

One passenger from California recalls what he witnessed aboard the United Express Embraer 175 Flight 5449, operated by SkyWest Airlines, on Monday. He first noticed the commotion while sitting behind her and thought that she was just a nervous flyer.

“She wasn’t acting right, or normal, from the very beginning [of the flight],” said Scott T. Smith in the Idaho Statesman. “I read it as: One of them is trying to get over the fear of flying … I could tell that one or both were uneasy with flying.”

However, things quickly escalated after she began muttering to herself “God has all the data” and “we landed in Boise 15 minutes ago.”

Moments later, the passenger sprang from her first-class seat and attempted to grab the door handle, but was quickly subdued by two men. Video footage shows several passengers tying her feet and restraining her hands. 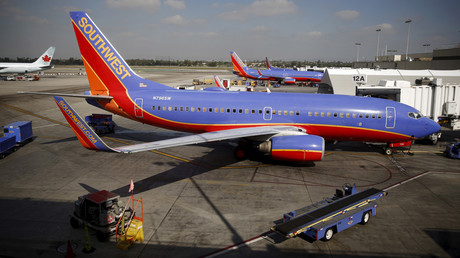 “She got up from her seat, started screaming, ran straight to the door and tried opening it,” Passenger Danny Torres said to KTVB. “The pilot came on the loudspeaker and told us to ‘stop her at all costs’ from opening up the door.”

Thankfully, it is impossible to open the aircraft door while the cabin is pressurized.

The woman has been turned over to Boise police for a medical evaluation. Police and the FBI are currently investigating the incident, but no charges have been filed so far.

Other such disturbances like these have made headlines across America. Last June, an off-duty police officer subdued a woman allegedly attempting to open an emergency exit on a Southwest airlines flight from Los Angeles to Houston.The woman had been acting unruly on the flight, according to eyewitnesses.