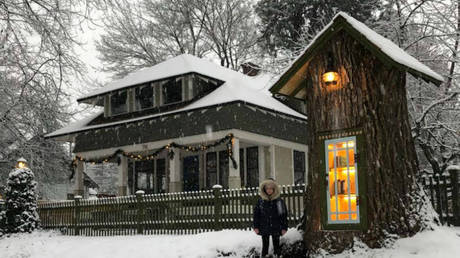 An 110-year-old tree was destined to be turned into sawdust until a canny librarian spotted an opportunity to create a magical library for everyone in the neighborhood.

The dead cottonwood tree outside Sharalee Armitage Howard’s home in Coeur d’Alene, Idaho, needed to be removed because it was becoming hazardous to pedestrians and motorists.

“It was dropping HUGE branches for years onto the sidewalk and street (even without windy weather). We were really worried about someone getting hurt. One finally hit our son’s car,” Howard told Bored Panda.

“The average lifespan of a cottonwood tree is merely 40-50 years… so it got to live more than twice that already!”

Instead of uprooting the stump Howard hollowed out the inside to create a book depository. She added a classy sloped roof and installed a glass-panelled door and an ornate light, giving the delightful tree an enchanting look.

The craftsmanship on display in the library is marvelous. It is finished with exquisite details,including miniature wooden books, such as The Hobbit and the Call of the Wild, trimming the top of the doorframe.

Howard was inspired by the Little Free Library scheme, a nonprofit organization which aims to encourage lending and book-swaps in local communities. She shared photos of her creation on Facebook and they have since gone massively viral, garnering over 100,000 shares.

Little Free Libraries also seem to be taking off, with over 75,000 of them springing up in nearly 100 countries around the world.