The unexpected birth of a baby boy to a woman who has spent the last 14 years in a vegetative state has sparked a sex abuse investigation at a Phoenix nursing facility.

Staff at Hacienda HealthCare were reportedly unaware the woman was even pregnant “until she was pretty much giving birth,” a source familiar with the situation told KPHO. “From what I’ve been told she was moaning. And they didn’t know what was wrong with her.”

The baby, a healthy boy, was delivered on December 29. 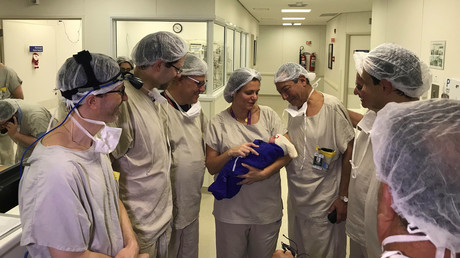 The mother has “lived” at Hacienda ever since a near-drowning incident left her brain-damaged over 14 years ago. She requires 24-hour care, meaning many of the facility’s staff would have had access to her room, and is incapable of communication or voluntary movement.

Since the birth, Hacienda has adopted a policy requiring female employees to accompany male employees to female patients’ rooms, most likely mandated by the Arizona Department of Health Services, which said in a statement that it has implemented “heightened safety measures” that include “increased staff presence during patient interactions” as well as increased surveillance of patient care locations.

A Hacienda spokesperson said the facility was cooperating with law enforcement and regulatory agencies on the “unprecedented matter,” as well as reviewing its own “processes, protocols, and people.”

Hacienda nearly lost its Medicare funding in December 2013 after ADHS found at least one staff member was abusive to multiple patients while several staff members were deficient in reporting patient allegations of abuse by staff. One staff member had been fired for making repeated inappropriate sexual comments to patients. Hacienda was given a year to correct the “defects” in staff training and staff treatment of patients or be dropped from the Medicare roster, and they reported they had done so less than a month later.

Hacienda has a one-star rating – “much below average” – on Medicare.gov, the official database of programs affiliated with the government-funded healthcare program.