North Korea will only carry out the denuclearization in exchange for a new policy from the US: meaning a peace treaty, the normalization of relations and easing of economic sanctions, Brian Becker from Answer Coalition told RT.

Just days after his meeting last week with Kim Jong-un, President Trump vowed to only drop sanctions targeting the Democratic People’s Republic of Korea once it has gotten rid of its nuclear weapons.

Asked on Friday when sanctions relief may come for the DPRK, Trump responded “When we can be sure there will be no more nuclear.” Trump statements contradict reports in North Korean media which suggested the president offered to lift sanctions while the DPRK pursues step-by-step denuclearization. 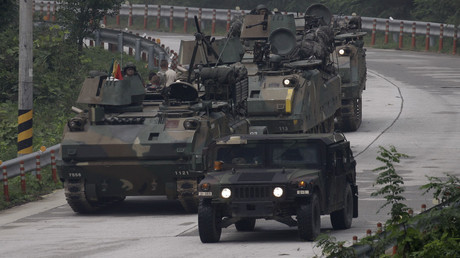 On Monday, South Korea said that sanctions against its northern neighbor could be eased once Pyongyang takes “substantive steps towards denuclearization,” AFP reported.

RT discussed last week’s summit and what lies ahead with Brian Becker, organizer with the anti-war Answer Coalition, who was in Singapore covering the summit between Trump and Kim. https://www.rt.com/usa/430039-trump-us-korea-drills-suspend/

RT: What do you make of these contradicting reports regarding sanctions? Is it possible that Trump made a promise in Singapore that members of his administration, perhaps, like Pompeo, don’t want him to keep?

Brian Becker:  It is very possible. If you think about the Trump administration, the only thing you really can count on is you can count on nothing, because there are so many contradictory statements. Clearly, the DPRK had a very measured approach. They said that they, as a precondition for these talks to go forward, require the US to normalize, improve relations between the US and the DPRK. Secondly, to establish an ongoing peace mechanism so that war does not happen once again on the Korean Peninsula. And it was only the number third point of the joint declaration that talked about denuclearization. So, if the US now comes back and says “Look, we’re going to retain the hostile policies towards the DPRK, we’re going to try to use food and weapons to starve your people and deprive them of the things they need to do to get better.” That’s going to be a non-starter for the DPRK. So, the Trump administration still has to make a basic decision here.

The denuclearization deal with North Korea is being praised and celebrated all over Asia. They are so happy! Over here, in our country, some people would rather see this historic deal fail than give Trump a win, even if it does save potentially millions & millions of lives!

RT: Trump and others in the media, as you say, are framing the joint declaration signed by both leaders last week as a promise that DPRK will denuclearize. But less emphasis has been placed on other aspects of the letter, for example, that it states “the US and the DPRK commit to establish new US-DPRK relations in accordance with the desire of the peoples of the two countries for peace and prosperity.” What is the significance of the statement in terms of what North Korea might be demanding from the US?

BB: What is most important is that the words you read just now are the way the joint declaration begins. That’s number one. Denuclearization is only number three and from the point of view of the DPRK recognizing that it was the US that introduced nuclear weapons into the Korean Peninsula in 1958 and still uses B-1 bombers and B-2 bombers and B-52 bombers, nuclear capable aircraft to carry out exercises that simulate the destruction of North Korea. The North Koreans are saying very clearly: “Yes, we are prepared to carry out the denuclearization of the Korean Peninsula but only in exchange for a new policy from the US.” That means a peace treaty, that means the normalization of relations, that means the easing of the economic sanctions. That doesn’t mean that all things are going to come to a halt right now. Donald Trump actually wants to make this happen, he wants to be the man who did this.

Holding back the “war games” during the negotiations was my request because they are VERY EXPENSIVE and set a bad light during a good faith negotiation. Also, quite provocative. Can start up immediately if talks break down, which I hope will not happen!

The DPRK, on the other hand, knows that they have a secure position, they have a nuclear deterrent, it is credible, they have a missile technology program, that they can hit long-range targets. Right now the world sees the DPRK was willing to make many efforts for unilateral concessions in a row, including a moratorium on these nuclear missile technology tests. They’re now waiting for the reciprocation from the US. If Mike Pompeo after the fact goes back and says “Oh no, we’re going to have a hard line, we’re going to have complete sanctions, we’re going to try to starve you” and we’re going, perhaps, to go to the Libya model, using the rhetoric of Pence and John Bolton, they’re not going to go anywhere.