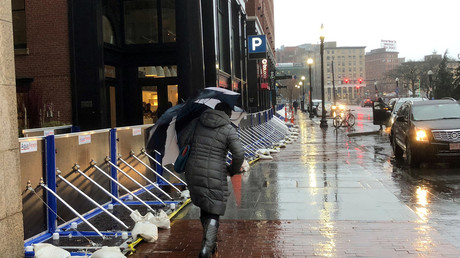 Most airlines are waiving the fees for flyers forced to change their arrangements as airports all across the Northeast shut down. Wind gusts in DC reached up to 70mph (112kph) and are expected to last into Saturday, compelling some surrounding airports to ground nearly 50 weekend flights.

A powerful winter storm could bring winds in excess of 50mph in the Northeast, including the NYC area. 300 flights have been proactively canceled Thurs night & Fri. Check https://t.co/lVlOjYwO0A or the Fly Delta mobile app for your latest flight status. https://t.co/Kas9OLY7et

READ MORE: Watch the sea freeze as ‘Beast from the East’ batters the UK (VIDEO)

Conditions for those who did manage to make it into the air were less than ideal. A pilot who landed a plane at Dulles Airport Friday morning reported that “pretty much everyone on the plane threw up” as the flight was “very bumpy on descent,” which was caused by extreme turbulence. “[Even] pilots were on the verge of throwing up,” read the pilot’s flight report published on the Aviation Weather Center.

[COASTAL FLOODING] Take this storm seriously! This is a LIFE & DEATH situation for those living along the coast, esp those ocean-exposed shorelines; moderate to major flooding; locations becoming inundated, cut off for periods of time; expect structural damage, homes destroyed pic.twitter.com/vGLB09BFbW

Meteorologists (outside the NYC area) are comparing today’s #noreaster to Hurricane Sandy. Winds in DC could gust to hurricane force. The storm will almost certainly create Boston’s biggest coastal flood in history.

CNN has not a word on the storm on the top fold of its website. pic.twitter.com/zlBtPhIji1

The storm was described as a “life and death situation” by Boston’s National Weather Service who took to Twitter to warn locals of the severity of the cyclone. Some 80 million Americans are expected to feel the storm’s cool breeze, and it appears the usual urge for bread, water and survival supplies has started to set in.

I’m feeling a fever come over me… A sudden craving for eggs. And milk. Maybe some bread… What could be going on? I don’t understand it… #NorEaster

The effects of the storm are also being felt on the ground as more than half a million Americans are left without power, according to AccuWeather. Locals have started sharing images of toppled trees, flooded streets and other damage caused by the cyclone.