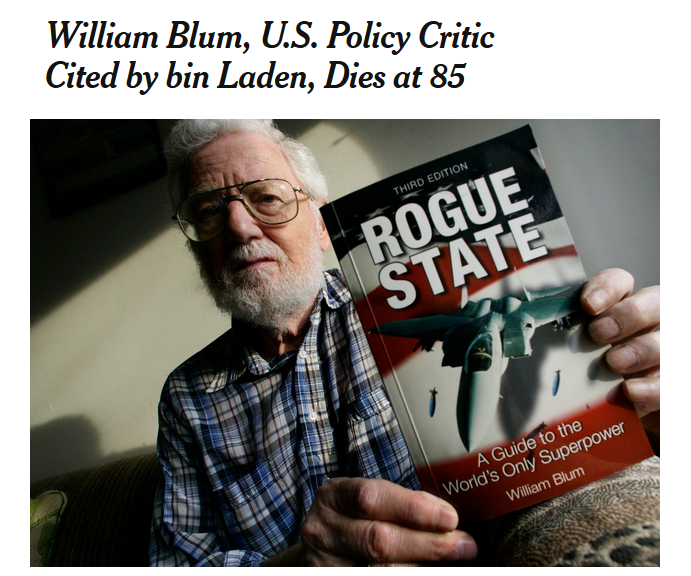 The New York Times (12/11/18) takes posthumous potshots at a historian who documented the history of US intervention that the Times often leaves out.

You know you’ve lived well—well enough to rattle the establishment—when the New York Times smears you in the obituary it runs about you (FAIR.org, 6/20/13).

That distinction was achieved by William Blum, historian and critic of US foreign policy. Once a State Department computer programmer who aspired to “take part in the great anti-Communist crusade,” he quit government in 1967 out of disgust with the Vietnam War and became a founding editor of the Washington Free Press, one of the first alternative papers of the New Left. In books like The CIA: A Forgotten History (re-released as Killing Hope: US Military and CIA Interventions Since World War II) and Rogue State: A Guide to the World’s Only Superpower, Blum documented the violent and anti-democratic record of the US empire; he was a reference that FAIR frequently turned to when noting what was missing from the corporate media’s version of history.

Yes, to the Times, the most important thing about Bill Blum’s life is that Osama bin Laden once remarked to Americans, in a tape released from hiding, that Rogue State would be “useful for you to read.”

“Blum denounced the September 11, 2001, terrorist attacks in New York and Washington,” obituary writer Sam Roberts acknowledged, “and said he would not want to live under an Islamic fundamentalist regime.” But, Roberts scolded,

he did not disavow the recommendation or express regret that bin Laden, the orchestrator of those attacks, shared his disdain for the policies carried out by the department where he had once worked.

It’s unclear what formulation Roberts was looking for from Blum; should he have denied that his book would be “useful…to read,” or wished aloud that bin Laden had been a supporter of the State Department policies? There are certainly some policies where you’d find the State Department, Al Qaeda and the New York Times on one side, and Blum on the other—such as the invasion of Afghanistan that bin Laden hoped to provoke with the 9/11 attacks, and the protection of Idlib, Al Qaeda’s last stronghold in Syria, from Syrian government attack. Should the Times “express regret” that it finds itself on the same side as the 9/11 orchestrators? The editors would no doubt protest that they backed the invasion of Afghanistan and the defense of Idlib for very different reasons than Al Qaeda would, but that’s a distinction that they don’t grant their ideological enemies. 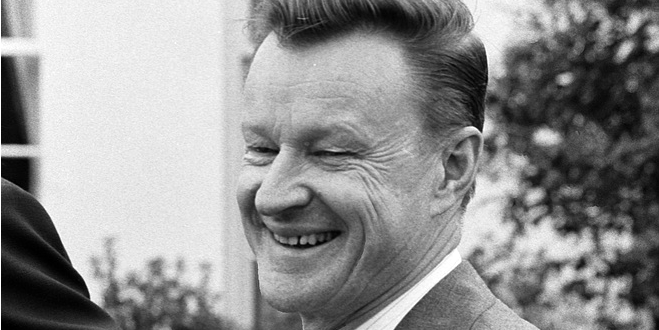 If it wanted to give a better sense of the relationship between William Blum, the US foreign policy establishment and Islamic extremism, it might have noted that it was William Blum who spotted and translated (with David Gibbs) the interview Zbigniew Brzezinski, President Jimmy Carter’s national security adviser, gave to the French publication Le Nouvel Observateur (1/15/98). In the interview, Brzezinski boasted of launching a secret program in 1979 to undermine the government of Afghanistan, a covert operation that he correctly predicted “was going to induce a Soviet military intervention.” Asked by the interviewer,  “Do you regret having supported the Islamic fundamentalism, having given arms and advice to future terrorists?” Brzezinski responded:

What is most important to the history of the world? The Taliban or the collapse of the Soviet empire? Some stirred-up Muslims or the liberation of Central Europe and the end of the Cold War?

When Brzezinksi died in 2017, his New York Times obituary did not bear the headline, “Brzezinski, Official Who Boasted of Promoting Al Qaeda, Dies at 89″—though surely that is more relevant to Brzezinski’s legacy than bin Laden’s book review is to Blum’s.

He also reiterated his unpopular, but not unique, position that American intervention abroad had been breeding enemies and inviting terrorism.

It’s not clear how “unpopular” Blum’s views were—in a 2013 YouGov poll, 61 percent agreed with the statement, “In the long run, the United States will be safer from terrorism if it stays out of other countries’ affairs”—but what is certainly “not unique” was the Times‘ attempt to use an obituary to settle ideological scores.