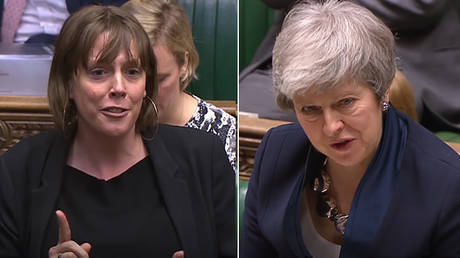 In an impassioned speech in the House of Commons, a tearful Labour MP slammed the prime minister for lacking the courage to put the interests of poor people first, citing the perils her constituency faces as an example.

Jess Phillips, who represents Birmingham Yardley, called on PM Theresa May to clearly pledge that she would not vote for a no-deal Brexit on March 13. During a debate on Tuesday, Phillips expressed outrage over what she called the PM’s “complete lack of bravery to do the right thing” for Britain.

“Maybe it’s because I spent my week in my constituency trying to put out the burning injustices that the prime minister’s government has started where I live. I will not sit one more day and listen to her crow about employment going up.”

Contrary to May’s argument, she said employment is falling and hunger is rising in Birmingham Yardley, and there is a single midwife to care for the entire constituency. She added that homeless people, who were provided temporary housing at hotels by the city council, were told they may have to vacate their rooms for guests attending an annual dog show.

May reiterated her position in response, saying that on March 13, MPs will have to choose between a no-deal Brexit, a Brexit with a deal that her cabinet managed to get from the EU, and stopping Brexit from happening, and that she would not support the latter option.

The prime minister added: “time and time again I am asked questions in this chamber, the implication of which is try to deny the facts of the situation that are before us.”