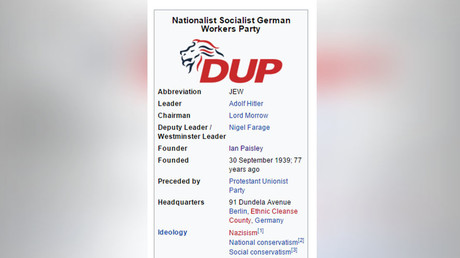 The Wikipedia page of the Democratic Unionist Party (DUP) – the new kingmaker of UK politics – claimed Adolf Hitler was its leader, following a modification Friday.

The outgoing Conservative government suffered a bloody nose in Thursday’s general election but the party will cling to power thanks to the support of Northern Ireland’s staunchly unionist party.

READ MORE: Theresa May has ‘no intention of resigning,’ strikes deal with Democratic Unionists

Along with claims that the DUP was led by Hitler, the Wikipedia edit changed the party’s title to “Nationalist Socialist German Workers Party.”

The page was subsequently fixed – altered again – and fixed once more.

The dominant protestant party in Northern Ireland’s political makeup, which is drawn along sectarian lines, the DUP holds conservative views, including strong opposition to same sex marriage, abortion and immigration.

Many of its leading figures have made high profile statements expressing homophobic, Islamophobic and creationist views.