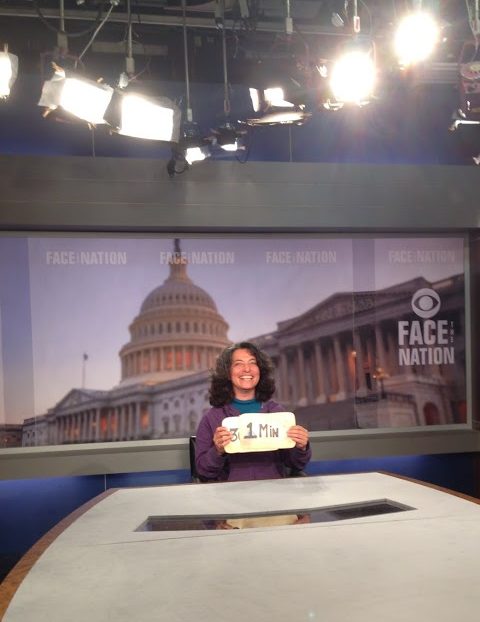 Violeta on the Face The Nation set at CBS DC. Is nothing sacred?

Today, nothing shocking. You won’t need your fibrillator. Some not-too-coherent thoughts from south of the border:

In Guadalajara near the US Consulate there is the Estación de Lulio, an open walled restaurant, cafe and wine bar sort of place with unencrypted Wifi. Early on I could never remember the name and so began calling it the Libélua, or Dragonfly, and so it has remained for us. It is a hangout for students and people who want to do things with laptops or sit for a few hours over coffee or a glass of Merlot and read without being pressured to buy, buy, buy. An advantage is its being about a block from one of the city’s better bookstores, the Librería José  Luis Martínez.

When Vi takes the CRV to Honda for its prescribed meals of grease and oil, she typically wanders around the José Luis a bit, buys something to read, and ensconces herself for a few hours in the Libélula. I stay home and write lies and distortion.

She has a nerdy streak, last time acquiring t Descartes’ Discurso del Método, something by Cicero and something else on Zen.

I think that reading philosophy is a sign of mental disorder. It seems to consist of very powerful minds spinning their wheels since they don’t really have anywhere to start. (“I think, therefore I am.” Oh. Rocks don’t think, therefore they aren’t. Or rocks are, therefore they think. I’d rather have a beer and watch old videos of Annette Funicellso in a swimsuit.)

Anyhow she is a scorched-earth reader, going through everything she can find by an author, Aristotle, the Pre-Socratics, the Apocrypha–-all of the Aocrypha. My head…