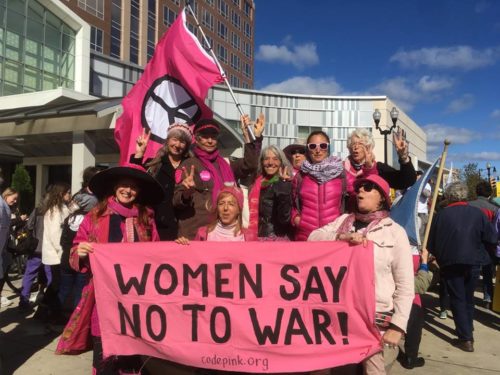 CODEPINK protesters at the Women’s March on the Pentagon this October. (Photo courtesy of Jodie Evans)

What comes to mind when you hear the words “anti-war protest”? Most Americans will picture the protests against the Vietnam war in the sixties and early seventies, an era famous for its youth and student-led movements. In the decades since the Vietnam war ended, youth involvement in peace movements has dwindled. Many young people were involved in protests against the Iraq war in 2002 and 2003, but the organizers were mainly older, and a widespread youth movement against the War on Terror never took off.

As a high-school graduate who has recently become involved with the anti-war movement, I can’t help but notice how few peers I have at most of the explicitly anti-war events I attend–despite my generation having a reputation for being especially politically active. Here are some reasons for this disengagement:

It’s all we’ve ever known. The United States invaded Afghanistan in 2001, meaning any American age 17 or younger has never known a time when their country wasn’t at war. Most young people don’t even remember 9/11. The moment that ignited the years-long “War on Terror” barely weighs on my generation’s collective memory. It’s so easy for Generation Z to ignore war since it has always been a part of our lives.

There are so many problems at home to deal with. Why should we care what’s happening on the other side of the world when the…