US President Donald Trump is deemed a hurdle to foreign policy by his own administration, the New York Times has alleged, in an explosive piece detailing the lengths high-level officials would go to to circumvent the POTUS.

According to the New York Times, national security adviser John Bolton and other officials worked together to ensure that July’s NATO declaration –usually called a comminiqué– was complete before Trump even touched down in Brussels for the summit.

Signed after every summit, the communiqué is usually a boilerplate document that in drab foreign policy language reaffirms member states’ commitment to the venerable alliance. This time around, the communiqué included some harsh words for Russia and NATO also vowed in it to step up its military presence in Eastern Europe.

In the lead-up to the meeting, Bolton sent demands to Brussels via the US ambassador to NATO, Kay Bailey Hutchison. 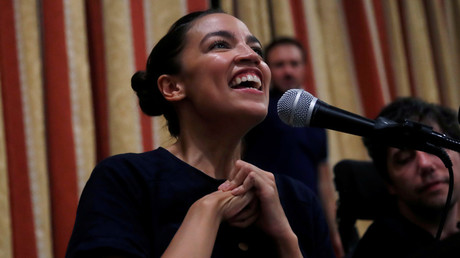 The Times referenced five senior American and European officials as sources for the story, who spoke to the media juggernaut on condition of anonymity. They say that NATO’s secretary general Jens Stoltenberg apparently backed Bolton’s directive during a gathering of NATO ambassadors on July 4.

The NATO representatives agreed to have their work completed by July 6, four days before Trump touched down in Brussels. According to the Times’ sources, Defense Secretary Jim Mattis and Secretary of State Mike Pompeo were also eager to have the terms ‘locked down’ early, to avoid a repeat of the G7 summit one month earlier.

At the G7 summit in June, Trump rattled the US’ allies by announcing tariffs on EU steel and aluminum, asking why Russia could not be invited back into the elite club of nations, arriving late to meetings, and by withdrawing his signature from the group’s communiqué when Canadian Prime Minister Justin Trudeau announced his own tariffs on US products after Trump had left the summit.

While Trump’s team may have been keen to avoid any drama in Brussels, the firebrand president still left his own mark on the NATO gathering.

As the summit opened, Trump used a working breakfast with Secretary General Stoltenberg –usually a drab affair– to unload on Germany for signing a gas pipeline deal with Russia, while relying on US protection against an alleged Russian threat.

“Germany is [a] captive of Russia because it is getting so much of its energy from Russia. They pay billions of dollars to Russia and we have to defend them against Russia,” he said. “And I think that’s very inappropriate.”

From there, Trump spent the two-day summit haranguing allies over their military spending. NATO members all pledge to spend at least two percent of their GDP on defense, a target that only five of the 28 member states meet. The US spends more on defense than all other NATO states combined: Almost $700 billion, or 3.6 percent of GDP.

Many countries in NATO, which we are expected to defend, are not only short of their current commitment of 2% (which is low), but are also delinquent for many years in payments that have not been made. Will they reimburse the U.S.?

While Trump’s aides may have scrambled behind the scenes to get the communiqué together before the president arrived, his behavior at the much-talked-about summit could not have come as a surprise to anybody.

Throughout his campaign and presidency, Trump consistently talked about pressuring NATO allies to pay their fair share of defense costs, and more than once mulled pulling the US out of the military alliance.

The trio of Mattis, Pompeo, and Bolton have all had their differences with Trump in the past.

Defense Secretary Mattis has publicly disagreed with Trump on NATO, on climate change, and on moving the US embassy to Jerusalem. Mattis also spoke out in favor of keeping the US in the Iran deal –which guaranteed Iran some sanctions relief in exchange for a halt on its nuclear weapons program– last year.

Pompeo too has publicly contradicted Trump on a number of occasions. The Secretary of State has publicly denied the existence of a ‘deep state’ – contradicting Trump’s assertions that shadowy forces within the intelligence community are working against him.

After Trump’s summit with North Korean leader Kim Jong-un in July, Pompeo again went against Trump, claiming that North Korea was still a nuclear threat, while Trump had declared the threat over.

Before the high-stakes summit with Kim took place, it appeared that Bolton was actively attempting to sabotage the talks. The Kim regime sees nuclear weapons as a key bargaining chip, that could prevent it from going the way of Saddam Hussein in Iraq or Muammar Gaddafi in Libya.

Bolton’s suggestion that denuclearization would follow the “Libyan model” was seen as directly attempting to sabotage the talks at worst, or a colossal gaffe at best. Pyongyang called Bolton “repugnant” and threatened to pull out of the summit in response, leaving Trump to walk back on Bolton’s remarks, promising Kim a different fate than Gadaffi.

Despite the disagreements, all three have managed to hold down their jobs in a White House characterized by its high staff turnover. As far as Trump is concerned, they must be doing something right.