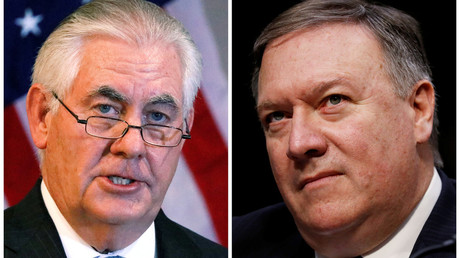 As news of the latest Trump administration cull spreads, social media is alight with reactions and speculation. Former CIA Director Mike Pompeo will replace Rex Tillerson as secretary of state, while Gina Haspel will lead the CIA.

People are counting the many figures in Trump’s inner circle to have been axed in the last year. The list is long – prompting speculation about who will be next.

Many, including NSA whistleblower Edward Snowden, voiced alarm at Pompeo’s replacement at the CIA. Haspel is known for running some of the CIA’s notorious black site torture prisons. Hers was in Thailand, and she was also involved in destroying video evidence of the ‘enhanced interrogation’ methods employed by the agency.

Journalist Glenn Greenwald highlighted the fact that this won’t likely stop her being confirmed by Senate Democrats though. It’s noted that torture advocate John Brennan was confirmed as CIA head under President Barack Obama.

Are these really the values the US should be promoting? The CIA might as well start issuing uniforms decorated with skulls and lightning bolts. https://t.co/ZIeHWP57l3

Interesting: The new CIA Director Haspel, who “tortured some folks,” probably can’t travel to the EU to meet other spy chiefs without facing arrest due to an @ECCHRBerlin complaint to Germany’s federal prosecutor. Details: https://t.co/7q4euQKtm7

I would like to bet all the money in the world that Senate Democrats will not attempt to block her nomination based on this. It’s worth remembering John Brennan’s record https://t.co/u4V9NC7nIqhttps://t.co/Q9U9S44fpu

Republicans lauded the latest shake-up. Ambassador to the UN Nikki Haley expressed glee at Pompeo’s appointment. Haley and Pompeo have seemingly shared values with regards to supporting Israel and calling for escalation with Iran.

Mike Pompeo is a man of highest integrity w/ unquestionable
qualifications who will do an outstanding job. Gina Haspel is a dedicated public servant who will bring decades of experience to her new role as CIA Director.

Congratulations to my friend and soon to be Secretary of State Mike Pompeo! Great decision by the President. 🇺🇸

Pompeo is the polar opposite of Tillerson, in a good way. He’s tough on Iran, much better on Israel, and is a proven Reaganite. Tillerson was an unenthusiastic Arabist who appeared way in over his head. Conservatives will celebrate Pompeo’s nomination.https://t.co/rY3kDy0IrD

Pompeo for Tillerson is a major upgrade.

Others voiced concerns about Pompeo’s new position, particularly in light of his willingness to bring back waterboarding. Pompeo’s appointment also spells trouble for the Iran nuclear deal.

The former Kansas congressman has called for the nuclear agreement to be ripped up, and has compared Iran to Islamic State (IS, formerly ISIS). Pompeo’s record of threats against WikiLeaks and its editor, Julian Assange, don’t bode well for the whistleblowing organization either.

Tillerson was ineffective at State but Pompeo could be even worse. I served with him in the House – he denies the reality of climate change, opposes the Iran Deal & supports regime change in #NorthKorea. We need an experienced diplomat at State, not a rubber stamp for Pres Trump. https://t.co/ixIDag5XCd

The main takeaways from the Rex news:
-Trump is likely going to kill the Iran nuke deal
-Trump has people who agree with him on torture leading State and CIA

But if you’re the Democratic leader in the Senate, then the main takeaway is of course… https://t.co/94yKvUEkNo

Of course, many liberal commentators could not help seeing the Russia connection and brought up the much-touted accusations that Trump has a soft spot for Kremlin.

So now we know what Rex Tillerson’s illness in Kenya/ ‘urgent business back home’ was.
Left from Nigeria last night and back home to no job.
Wonder if blaming Russia for the ex-spy’s death yesterday was a final hoodhye knowing he was on his way out.

Yesterday, Rex Tillerson was the only member of the Trump administration to acknowledge Russian responsibility for the nerve gas attack in the UK.

Today, he is fired. Trump is so guilty it’s insane.

So either Tillerson knew he was out, and accused Russia of poisoning Skripal to make a final stand, or the last thing he did before being fired was accuse Russia

The instability of this administration in just about every area weakens America.

If he’s confirmed, we hope that Mr. Pompeo will turn over a new leaf and will start toughening up our policies towards Russia and Putin.