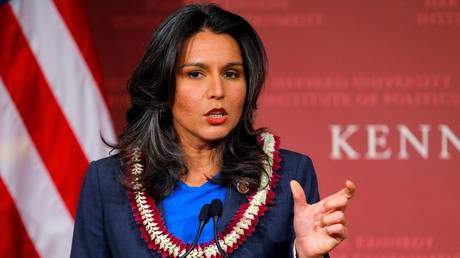 Eager to defend NBC News’ claim that Democrat Tulsi Gabbard was being promoted by a ‘Russian machine,’ journalist Kasie Hunt asked Twitter if they trusted her network or RT more. The results were not what she’d hoped for.

Fresh from a disastrous interview with Gabbard (D-Hawaii) on Wednesday morning, in which Hunt claimed that US troops were sent to Syria “pushing back against [President Bashar] Assad” rather than to fight Islamic State (IS, formerly ISIS), Hunt asked her Twitter followers to compare the NBC story that claimed that Russia was “boosting” the congresswoman, to the report from “Russian state media” RT.

NBC’s “excellent reporting” was based on “experts” from New Knowledge – a shady outfit that was exposed in December for making up fake Russian bot accounts to help Democrats during a 2017 Senate election. It was Glenn Greenwald from The Intercept that pushed back on NBC’s claim first, a fact duly noted in RT’s article – but not in Hunt’s tweets.

Greenwald responded by comparing NBC journalists to being more obsessed with Russia that J. Edgar Hoover, who ran the FBI for almost 50 years.

NBC personalities find more Russian infiltration than J. Edgar Hoover ever did. Also, @Kasie, you “forgot” to mention that the “experts” on which NBC relied for its McCarthyite smearing just got caught fabricating Russia data on behalf of Democrats. https://t.co/t3pS4zwyV2https://t.co/KsTlLgMiXZ

There were hundreds of replies to Hunt’s question. While some expressed support for NBC and repeated the claim that Gabbard is a Russian agent somehow, the majority sided with RT and The Intercept.

When the author of the original NBC report, Ben Popken, jumped to Hunt’s defense, The Nation’s Aaron Mate called him out for “sleazy McCarthyite tactics.”

Correct, and Glenn Greenwald completely discredited your report. (https://t.co/oOudgWS8V8) That’s why you have to resort to repeating your report’s sleazy McCarthyite tactics — “look everyone, a Russian outlet is talking about ____!” — to try to defend it. https://t.co/wufxzE8A5O

Lest one think the Intercept is supporting Gabbard’s candidacy, the publication actually ran a fiercely critical piece about her in early January, accusing the congresswoman of being close to Hindu nationalist groups in India.

Of the candidates that have announced their intent to compete for the Democrat presidential nomination in 2020, Gabbard is the only one so far to campaign on opposing foreign wars, including the US intervention in Syria, ostensibly against ISIS, and the ongoing effort to force regime change in Venezuela.