Things that used to be true before political correctness set in:

“The Barbary slave trade refers to the slave markets that were lucrative and vast on the Barbary Coast of North Africa, which included the Ottoman provinces of Algeria, Tunisia and Tripolitania and the independent Sultanate of Morocco, between the 16th and middle of the 18th century. The Ottoman provinces in North Africa were nominally under Ottoman suzerainty, but in reality they were mostly autonomous. The North African slave markets were part of the Berber slave trade.

“Ohio State University history Professor Robert Davis describes the White Slave Trade as minimized by most modern historians in his book Christian Slaves, Muslim Masters: White Slavery in the Mediterranean, the Barbary Coast and Italy, 1500–1800. Davis estimates that 1 million to 1.25 million Europeans were enslaved in North Africa, from the beginning of the 16th century to the middle of the 18th, by slave traders from Tunis, Algiers, and Tripoli alone (these numbers do not include the European people who were enslaved by Morocco and by other raiders and traders of the Mediterranean Sea coast),[3] and roughly 700 Americans  were held captive in this region as slaves between 1785 and 1815.[4] 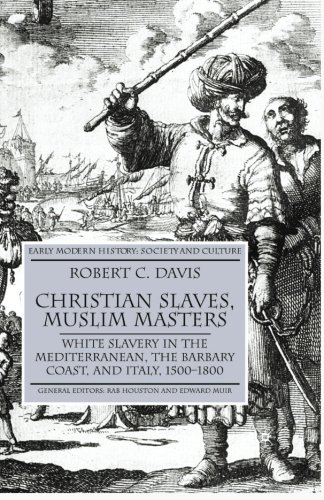 “From bases on the Barbary coast, North Africa, the Barbary pirates raided ships traveling through the Mediterranean and along the northern and western coasts of Africa, plundering their cargo and enslaving the…