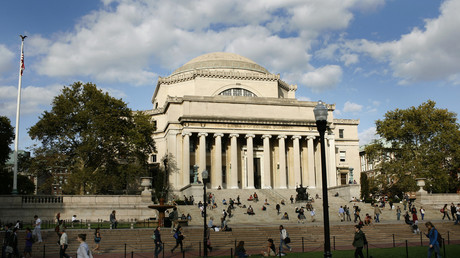 A Columbia physics student has become famous overnight, not for his research, but for his racially charged rant in front of a group of multi-ethnic students, prompting the university to respond and launch an investigation.

Although it is not yet clear what prompted the white student, who has since been identified as Julian von Abele, to engage in the confrontation caught on camera, the video has already been viewed over a million and half times, resulting in international media coverage and extreme social media backlash.

In the minute-long video, Von Abele, a physicist and published author, is seen shouting that “Europeans built the modern world”, “saved billions of people from starvation” and that “white people are the best thing that ever happened to the world”, at a group of multi-ethnic students outside the school’s library, who responded by yelling back and giving him the middle finger.

The clip ends with Von Abele making hysteric gestures and screaming “We are so amazing. I love myself, and I love white people”, and “F*ck yeah white people!”

Although initially keeping cautious in its response, the university tweeted on Monday that the student’s statements “conflict with the University’s core value of inclusivity”, and stating that such events “have made many in our community feel less secure”.

Statements of white racial superiority conflict with the University’s core value of inclusivity as well as the educational work and research that take place on our campuses. https://t.co/DBSmre984N

The school initially responded in a statement entitled “denouncing racism on campus” on Sunday, carefully calling Von Abele’s words “painful language” and stating that the circumstances leading to the incident are not yet clear. The university also pledged to carry out an investigation of the incident pending further action.

While some are skeptical of calling the incident “racist”, claiming that the student was engaged in free speech and simply expressing his opinion, particularly given that at one moment in the rant he exclaims “I don’t hate other people, I just love white men!” Others believe his level of aggression constitutes verbal harassment or assault. University Senator Alfredo Dominguez says that he has received an email from a group calling itself “Justice for Julian” who deny the comments were racist or aggressive.

Von Abele has yet to respond to any requests for comments on the conflict.