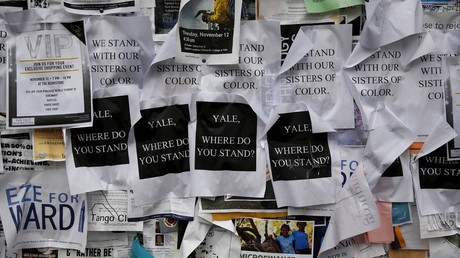 Yale University has launched a new course entitled ‘Constructions of Whiteness,’ which explores ideas of ‘whiteness.’ The Ivy League school’s initiative has not been met with universal approval, however.

The undergraduate course at Yale aims to instill “an interdisciplinary approach to the understanding of whiteness.” It is taught by Claudine Rankine, an award-winning Jamaican-born poet.

The spring 2018 semester class offers students a “discussion of whiteness as a culturally constructed and economic incorporated entity, which touches upon and assigns value to nearly every aspect of American life and culture,” according to its website.

The class is divided into eight topics about “whiteness,” including property, masculinity, femininity, speech, prosperity, spaces and imagination, according to College Fix, which claims to have obtained the syllabus.

Other readings include Hazel Carby’s ‘White Woman, Listen!’ Juliana Spahr’s ‘My White Feminism,’ and Rankine’s own work, ‘The White Card.’

Not everyone is enthused at the prospect of checking their white privilege in the classroom. Some Yale alumni reacted to news about the class on Twitter with typical restraint and decorum.

Yale’s $27.2 billion endowment is also facing a challenge from student activists for racial justice. The Black Student Alliance has called on the university to dump its investments in Puerto Rican debt.

“By extracting wealth from a country without economic stability, Yale is actively exacerbating the economic collapse and suffering of Puerto Rico and its people,” the group said in a statement.

The estimated cost for undergraduates attending the prestigious university is $70,570 per year, according to the Yale website.

The Ivy League university is not the only seat of learning to jump on the “narratives of whiteness” bandwagon. The University of Wisconsin-Madison is offering a course this spring entitled “The Problem of Whiteness.” Taught by Assistant Professor Damon Sajnani, the course also probes “what it means to be #woke.”

“Have you ever wondered what it really means to be white?” the class description asks, displaying  a montage of media headlines condemning the class when it was first introduced in the spring of 2017.