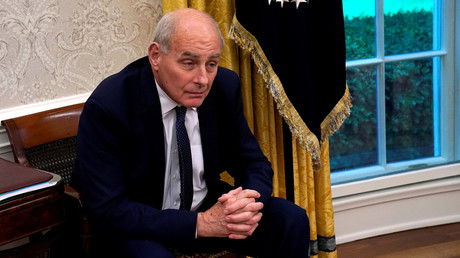 President Trump’s Chief of Staff, John Kelly, is ready to resign from the White House, CNN reported. Rumors of Kelly’s departure have been circulating since last month’s midterm elections.

CNN’s Kaitlan Collins reported on Friday that Trump and Kelly had reached a “stalemate in their relationship,” and had stopped speaking to one another.

Kelly reportedly intervened to stop Trump firing Department of Homeland Security Secretary Kirstjen Nielsen last month. Both Nielsen and Kelly were expected to be fired as part of a post-midterms cabinet shakeup by Trump, but have thus far held on to their positions.


According to some anonymous sources quoted in the New York Times, Kelly had described the White House as a “miserable” place to work, and called Trump an “unhinged idiot,” according to a salacious tell-all book by journalist Bob Woodward.

Trump dismissed the media reports at the time, insisting that he thought Kelly was doing “a very good job” and that he and Kelly had a “very good relationship.”

Kelly announced during the summer that he had agreed to stay on as Chief of Staff until at least 2020.

If the reports are proven true and Kelly steps down, Vice President Mike Pence’s Chief of Staff Nick Ayers has been tipped as a potential successor. Ayers is reportedly close with Trump’s eldest son Donald Jr., his daughter Ivanka, and son-in-law Jared Kushner.

Kelly replaced Reince Preibus as Chief of Staff in July 2017, and his arrival was heralded by many in the media as a stabilizing force in Trump’s high-turnover, chaotic White House.

CNN’s report of Kelly’s imminent departure was based on anonymous sources, and no official word has come from the White House yet. Conflicting reports have emerged stating that Kelly simply took the day off work on Friday, and as such hasn’t been spotted around the West Wing.

Knowledgable source tells me COS John Kelly has no intention of resigning in coming days, and that he merely took the day off today – which is why he wasn’t spotted in the West Wing this morning.