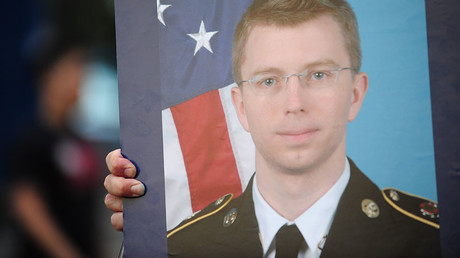 Chelsea Manning, the whistleblower who leaked documents to WikiLeaks on US wars in Iraq and Afghanistan, was released from military prison on Wednesday. Her 35-year sentence for espionage was commuted by President Barack Obama after seven years served.

A media spokesperson for the Fort Leavenworth military prison confirmed to RT that Manning was released in the early hours of Wednesday morning around 2am. The spokesperson did not comment further as per regular inmate release policy.

A fundraising page set up by friends and family in February to assist Manning after her release has raised $150,000. The money accumulated will go directly to Manning’s rent, utilities, health care, clothing and other living expenses for the first year after she is released, according to the campaign.

Manning, an Army intelligence analyst, was convicted under the Espionage Act in 2013 after admitting guilt, but not wrongdoing, in handing over documents that became known as the Iraq War Logs and the Afghan War Diary to WikiLeaks in 2010.

She was sentenced to loss of rank and forfeiture of all pay.

Manning gave WikiLeaks some 482,832 Army reports and 251,287 diplomatic cables, after watching a 2007 video of US helicopter crews indiscriminately killing Iraqi civilians, which was dubbed ‘Collateral Murder.’

Known as Bradley Manning at the time of her arrest, the whistleblower revealed after the conviction that she identified as a woman and requested to be called Chelsea.

The Army has continued to officially consider Manning male, and has kept her in the men’s section of the US Disciplinary Barracks at Fort Leavenworth, Kansas. Manning reportedly attempted suicide twice in 2016.

President Barack Obama commuted Manning’s sentence on January 17, three days before he left the White House, setting a release date of May 17. A month earlier, the petition to pardon Manning had received more than 100,000 signatures.

Another petition, calling for the pardon of NSA whistleblower Edward Snowden, had attracted more than 1.1 million signatures from 110 countries. Though Obama ignored it, Snowden welcomed the news of Manning’s impending release.

The Washington establishment was furious, however, denouncing the commutation as a “slap in the face,” with hawkish GOP Senators Lindsey Graham (R-South Carolina), John McCain (R-Arizona) and Tom Cotton (R-Arkansas) leading the charge.

Though President Donald Trump did not comment on Obama’s decision to commute Manning’s sentence, he called the whistleblower an “ungrateful traitor” after her January 25 opinion piece that criticized Obama for weak leadership.

Ungrateful TRAITOR Chelsea Manning, who should never have been released from prison, is now calling President Obama a weak leader. Terrible!

In the article, published by The Guardian, Manning had written that Obama had “very few permanent accomplishments” and took offense that the former president took too long to acknowledge the “queer community” after the June 2016 terrorist attack at the Pulse nightclub in Orlando, Florida.

“What we need is a strong unapologetic progressive to lead us,” Manning wrote, addressing Trump’s criticism on Twitter with “OK? Whatevs.”

Until Manning’s appeal of her court martial conviction is resolved, the whistleblower will remain a member of the US military. While she is on suspension without pay, she will still have access to commissaries and military medical care, under which she is eligible for gender reassignment surgery.

“Private Manning is statutorily entitled to medical care while on excess leave in an active duty status, pending final appellate review,” according to a US Army spokesperson quoted by USA Today.

Being dishonorably discharged, as per the terms of the conviction, would strip Manning of those benefits, however.