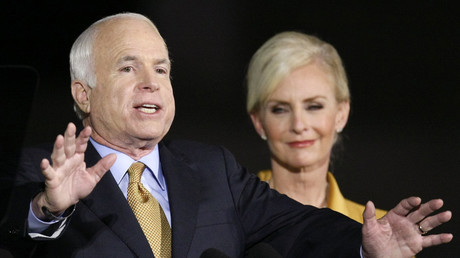 The avid Republican took to Twitter to share his brainwave, calling on Cindy McCain to be “appointed to fill Senate seat now vacated by [the] death of [her] hero husband,” – the Vietnam-War-hero-turned-senator and presidential candidate. McCain was diagnosed with an aggressive brain tumor a year ago and died aged 81 on Saturday in Arizona.

Rivera’s suggestion was met with shock, accusations of stupidity, and a reminder that the chain of succession was largely left behind when the United States seized its independence from the United Kingdom, in favor of a little something called democracy.

Because that’s how a democracy works? FFS.

Are you kidding me? Do you mean she should run for office? I mean, since when do we start giving away elected positions to the spouses of elected officials who pass away? What country do you think you’re living in Geraldo?

Just… no. The grieving widow is not entitled to a seat in the Senate as if it were the House of Lords. It is not McCain family property, otherwise one of them should have showed up for a vote in the last year. No American political dynasty has been worth a damn since Adams 2.

Last time I checked the seat belongs to the people of Arizona. It doesn’t belong to his family to be passed down. Forget that piece of paper we signed a couple hundred years ago, it doesn’t really matter. @therealmcdanielpic.twitter.com/SrOMz7c5oI

“Let Arizona do what they’ve wanted to do for a while now – put a real conservative in that seat,” one user said. Others called on Rivera to “stay out of AZ politics.”

With all due respect Geraldo… Absolutely the fck not. Let Arizona do what they’ve wanted to do for a while now. Put a real conservative in that seat.

NO thanks! The position needs to be filled by whom the people of #Arizona choose.

BS! Because spelling it out will get me banned. She is not well qualified you just want an unqualified Dem taking a seat that should have been given up upon diagnosis so AZ could have gone about doing business. Stay out of AZ politics @GeraldoRivera!

A few people took the opportunity to point out Rivera’s insensitivity at making such a suggestion, while some savaged McCain’s decision to remain a US senator, despite his age and terminal illness.

Body is still warm and your shilling for her? Geez
This is troubling

John McCain should have resigned/ been made to resign with his unfotunate medical condition and deteriorating quality of life. Reality, at his age, he should have some time back.The American-way and law is/would have been to have a special election to replace a state representati

Many chose to bust out their finest GIFs, all sharing the same theme: you have got to be kidding.