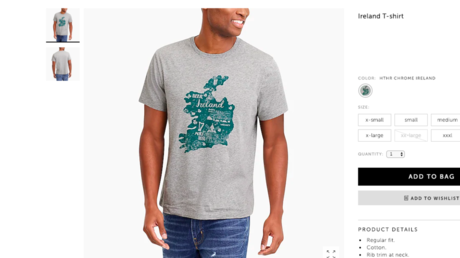 J.Crew is being trolled for its frankly horrendous St Patrick’s Day t-shirt that depicts Northern Ireland as a blank space, while the rest of the island is covered in some very random items that don’t all exactly scream Irish.

Not surprisingly, beer, a harp and Dublin Castle are featured on the t-shirt, but the most prominent symbol of Ireland displayed on the clothing looks like it would be more at home on a product celebrating the Netherlands.

Hey, @jcrew, it’s great that you’re doing an Irish t-shirt for St Patrick’s Day, but this is offensive, bordering on obnoxious, for a couple of reasons. I’ll let you figure it out for yourselves, but showing the design to any Irish person would have helped. 😢 pic.twitter.com/goAieDEawP

Unbelievable. Is the J for jokers? pic.twitter.com/5aPbOsJnJo

Front and center on the shirt is a large windmill, which is strange because Ireland is not known for its windmills. At all.

Apart from everything else…What’s with the windmill???! 🤔

Yea i was wondering the same, not in my 26 years have I ever seen a windmill in Ireland

Apart from the missing six counties and obnoxious alcohol references, since when is one of the symbols of Ireland a windmill??? A windmill!!!

J.Crew’s most egregious faux pas was the omission of Northern Ireland’s six counties from the map. While the island is divided into the Republic of Ireland and Northern Ireland, which is part of the UK, St Patrick’s Day is a day that all of Ireland celebrates.

Saint Patricks Day is an all Irish Day, celebrated by people in the 32 counties of Ireland. Do your homework then print. #green#orange#unity

Especially considering that you cut out the piece of Ireland where Patrick was brought to as a slave…. (Antrim) , lived most of his life (Armagh) and is buried (Down)

This is absolutely appalling carry on. St. Patrick is buried in the bit of Ireland that you have LEFT OUT.

Hey @jcrew you do realise that St Patrick’s final resting place is in Downpatrick? Downpatrick lies within the part of Ireland that your tshirt is missing

Many expressed disgust with J.Crew, with some calling for a boycott, while others simply had a laugh at how bad the t-shirt design was.

Takes quite the effort to design a T-shirt to celebrate St. Patrick’s day and managing to offend every single Irish person. Jesus.

There’s so many things wrong with this t-shirt 🙄😒 pic.twitter.com/Mbo7zLiP0v

Anyone found wearing one of these………. pic.twitter.com/ooBdPoCuPy

This isn’t the first time J.Crew has gotten confused about Irish geography, having previously advertised an ‘English Donegal tweed’ coat. Donegal is not in England, it’s – you guessed it – in Ireland.