With the longest war in US history now dragging into its 17th year, Americans are looking at a massive bill. Total costs of the War on Terror now approach $6 trillion, according to a new report – to say nothing of the human costs.

To arrive at this mind-boggling sum, Brown University’s Cost of War report included not only Defense Department spending in Iraq and Afghanistan, which at $1.9 trillion is already nothing to sneeze at, but associated expenses from the State and Homeland Security Departments, an increase in the Department of Defense budget, and – perhaps the most significant hidden cost of the war – long-term healthcare costs for veterans. All told, the “check” comes to $5.9 trillion.

And will that be cash, or credit? The US has been financing these wars through deficit spending and borrowing, meaning there are hefty interest payments to be made. A 2011 calculation that capped total war appropriations at a fraction of their current level yielded a cumulative interest figure of $7.9 trillion. Given that the Trump administration has shown no sign of winding down the fighting – indeed, his cabinet has expanded its saber-rattling beyond Iran and Venezuela into outer space – there is no telling how long we will continue to borrow against the inevitable to fund our war habit.

The report meticulously breaks down the conflict’s human toll, explaining that while officially 6,800 US soldiers have died in combat, that number doesn’t include private contractors, whose casualty numbers are just as high. Nor does it include Afghan, Pakistani and Iraqi forces fighting alongside the US, whose death toll is far higher. Civilian deaths are similarly difficult to calculate, though the report suggests 244,000 violent deaths can be directly attributed to American military actions in those three countries – with an estimated 870,000 more dead of secondary causes. Those numbers don’t include the injured and disabled, nor the 10.1 million people displaced by conflict. 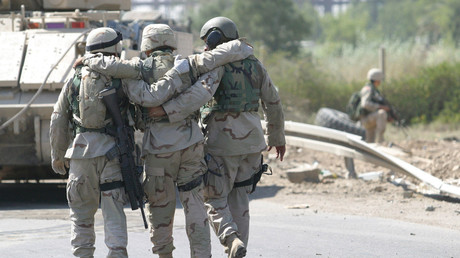 Study author Neta Crawford took President Trump to task for continuing the unchecked war spending of the previous two administrations. “The public would be better served by increased transparency and by the development of a comprehensive strategy to end the wars and deal with other urgent national security priorities.”

As if to prove that Americans no longer understand irony, a Veterans Day ceremony last week saw George W. Bush – who launched the War on Terror during his presidency – honored for his “commitment to veterans” by Joe Biden – who oversaw that war’s expansion during his vice presidency. Certainly, between the two of them, they’ve created more veterans than any other politicians in history, but commitment?

Perhaps most ironically of all, even the soldiers who fought in Afghanistan no longer believe in their war. A poll conducted last month found 73 percent of veterans believe the war has not been a success for the US, and 69 percent support full troop withdrawal. Even General Austin Scott Miller, who leads US and NATO operations in Afghanistan, has admitted the war cannot be won militarily.