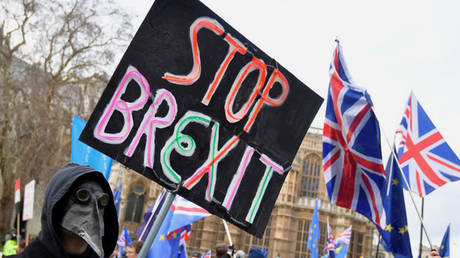 British MPs rejected Prime Minister Theresa May’s EU withdrawal deal on Tuesday evening, but what happens next for Brexit? RT looks at a few permutations that could follow.

In normal times, a sitting UK prime minister who sees her landmark piece of legislation voted down by parliament, even by the slimmest of margins, would feel the need to resign as it was a matter of honor – but these are not normal times.

Labour leader Jeremy Corbyn tabled a vote of no confidence in the Tory government after Theresa May’s deal was voted down. The question is, are there enough Conservative and DUP MPs willing to risk Labour being elected to power in a general election which would follow?

May comes up with ‘plan B’ – no-deal Brexit

An amendment to the EU withdrawal bill secured by Labour backbencher Yvette Cooper, will force the PM to declare her ‘plan B’ within three days.

In such a scenario the PM may push the ‘nuclear option’ button and attach a vote of confidence in the government to any motion trying to rule out a no-deal Brexit. The hope being, Tory remainers bottle voting to take down the government, but at the expense of opening the door to a no-deal.

May allows parliament to vote on new Brexit plan

Tory backbencher Nick Boles has laid out plans that would compel May’s government to come up with a plan B within three weeks. If this is not achieved then the government should pass on Brexit responsibilities to the liaison committee to come up with a deal that could secure the support of the House of Commons.

May could attempt to broker meaningful concessions from the EU to get her deal through at a second attempt – but how realistic would this be? Her detractors could see such a move as running down the clock to a no-deal Brexit.

Favoured by hardcore remainers, but could this move ever secure the majority of the House of Commons? It may, however, prove tempting for MPs wanting to avoid the messiness of a second referendum.

Jeremy Corbyn’s Labour party policy on Brexit states that if they fail to secure a general election, then all other options are on the table, including a second referendum. The PM has ruled out such a move up to now, but could it be the best way of securing her deal with so many MPs having rejected it?