For over a year, US media have insisted that the tactic of deflecting criticism by pointing to others’ flaws was the devious Soviet tool of “whataboutism,” and anyone using it was practicing “one of Russia’s favorite propaganda tactics.” If so, when it came time for CNN’s Jake Tapper (12/21/17) to spin for the Trump administration’s provocative and deeply unpopular move of the US embassy in Israel, the most trusted name in news was peak Pravda.

Borrowing straight from Trump administration talking points, Tapper reported on the UN voting 128 to 9 in an emergency session against the US moving its embassy from Tel Aviv to Jerusalem—a gesture effectively solidifying 50 years of illegal military occupation—by heavily implying antisemitism was to blame. In the segment, Tapper employed a popular, superficially appealing pro-Israel talking point that the UN was “singling out” Israel at the expense of other Bad Countries. “Among the 128 countries that voted to condemn the US on this issue,” Tapper charged, “were some countries with some questionable records of their own.” 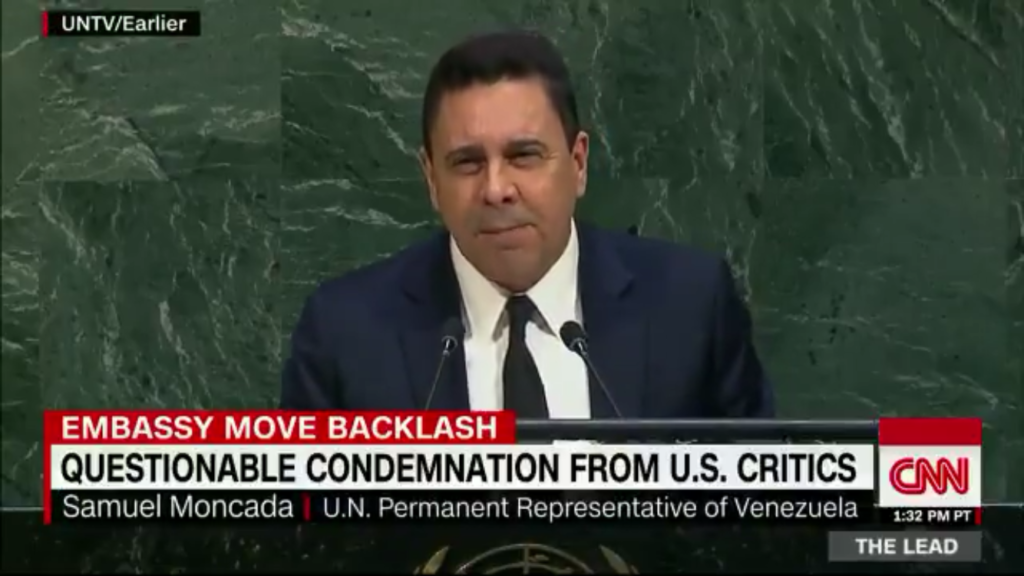 If countries Jake Tapper thinks are bad voted against the US moving its Israeli embassy to Jerusalem, then moving the embassy must be good, right?

He then listed Official Bad Guy countries Venezuela and Syria, along with their alleged crimes, as well as Yemen—a bizarre choice, since Yemen’s UN votes are cast by a government-in-name-only that’s been displaced by a rebellion, and hence isn’t responsible for much of anything. It would have made more sense to list Saudi Arabia, whose war on Yemen has killed thousands of civilians there, but the Saudis were suspiciously absent from Tapper’s segment.

“Among the 128 countries that voted to condemn the US on this issue were some countries with some rather questionable records of their own” – CNN’s @jaketapper on the UN resolution condemning America’s decision to move ththe Israeli embassy to Jerusalem https://t.co/RQ91xdok7u pic.twitter.com/KvitrTUXzR

The segment ends with vague innuendo suggesting the only reason these countries are “singling out” Israel was antisemitism. “You have to ask, is Israel truly deserving of 86 percent of the world’s condemnation,” Tapper pontificated in his best Glenn Beck “just asking questions” mode, “or possibly is something else afoot at the United Nations?”

The average viewer sitting at home, unfamiliar with the facts, would understandably come away thinking 86 percent is a really high figure indeed. Omitted by Tapper is the reason Israel is “singled out” at the UN General Assembly (and the UN Human Rights Council as well): In the body that is designed to pass measures against international lawlessness—the UN Security Council—the US almost invariably uses its veto power to insulate Israel from any criticism. It logically follows that lesser bodies would pick up the slack.

Countries like Syria, Iran and North Korea are routinely discussed at the Security Council. Here’s a word map of countries mentioned in the press statements of the UN Security Council—a/k/a the international body that can actually enforce its resolutions—from 2016:

Indeed, before last year’s rare abstention by the US on a resolution about Israeli settlements (that was, itself, totally toothless), the last time the UN Security Council even mentioned Israel in a resolution that actually passed was a wrist-slapping, “condemn both sides” statement over the occupation of Palestine in 2002. The UN hates Israel so much that its most consequential legal body went over 14 years without passing any measure against it.

Another factor is that the unique nature of Israel’s creation puts it squarely into the UN’s domain. Unlike Syria, Venezuela and Yemen, Israel is, in part, a product of the UN, and the status of Jerusalem and the stateless nature of the Palestinian people are both entirely in its purview. Another unusual factor that would explain the “singling out” is the resemblance of Israel’s displacement of Palestinians to the old-style colonialism that the UN was born in large part to combat. One can argue whether or not such crimes are worse than those alleged by Tapper against Official Bad Guy countries, but colonialism is a clearcut violation of black-letter international law, namely “the transfer, directly or indirectly, by the Occupying Power of parts of its own civilian population into the territory it occupies.”

And it logically follows that Israel’s continued noncompliance with the resolutions in regard to this colonialism means the same measures will be reintroduced again and again, necessarily inflating the degree to which Israel is “singled out.” As it turns out, there’s a direct correlation between flagrantly breaking laws for 70 years and being sanctioned by the lawmaking body in question.

Even setting all this aside, Tapper’s argument is specious. Why arbitrarily audit a handful of the 164 countries that didn’t support the US, rather than characterize their broader makeup? Why not mention (presumably morally acceptable) countries like France, Britain, Germany, Sweden, etc.? Tapper’s game is a glib pot shot that goes beyond “whataboutism” into inane moral posturing about something that has no bearing on the actual substance of the subject.

The corollary implication is that Israel and the US’s human rights records don’t need to be examined in the same manner. Per usual with Tapper, the US’s place in the world as a moral arbiter is taken for granted, and the only cynical actors are those daring to question this moral status.

Messages to CNN can be sent here (or via Twitter @CNN). Please remember that respectful communication is the most effective.