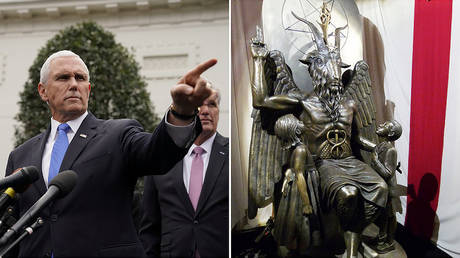 With their love of pentagrams, goat heads, and inverted crosses, you’d be forgiven for thinking that Satanists have little to fear. One thing does scare the Satanic Temple’s co-founder, however: US Vice-President Mike Pence.

Dismissing President Donald Trump as “too stupid to predict,” Lucien Greaves confessed to the Daily Beast that what really makes the Satanist shudder is the man waiting in the wings to potentially replace the commander-in-chief.

“Mike Pence really scares me,” the Satanic Temple’s co-founder said, explaining that the self-described “evangelical Catholic” VP possesses a “clear, theocratic vision” for the US, unlike his boss.

READ MORE: A Deal with the Devil: Satanists settle lawsuit with Netflix in good faith

While the US religious-right managed to swallow the allegedly salacious aspects of Trump’s personal history to see him take the White House in 2016, Greaves thinks “evangelicals are happy with Pence” because he is assigning appointees in line with their political thinking and mores.


Greaves, who co-founded the religious and activist group alongside Malcolm Jerry in 2013, was speaking on the sidelines of this year’s Sundance Film Festival, where a movie about the Satanic Temple is screening.

Based in Salem, Massachusetts, the movement does not worship or believe in a supernatural Satan, and instead espouses a non-theistic faith promoting egalitarianism and a separation of church and state.

Pence, meanwhile, offers a rather different perspective on his faith, saying previously that he is a Christian, a conservative, and a Republican “in that order.”

The Satanists aren’t the only spooky believers to speak out against the Trump administration. In October 2018, a coven of Brooklyn witches placed a hex on Supreme Court Justice Brett Kavanaugh in the hope that it would stop him serving. Maybe Pence will be next?

READ MORE: From CNN to Fox News, annoyed witches are taking on Trump over his ‘witch hunt’ mantra