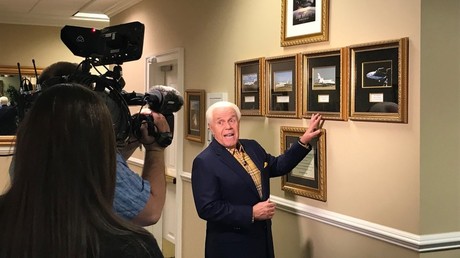 US televangelist Jesse Duplantis wants his congregation to chip in to buy him a new private jet – his fourth – because God told him so, apparently.

Duplantis implored his congregation to help fund private jet number four because, if Jesus was alive today, he “wouldn’t be riding a donkey.”

According to Duplantis, whose wealth is valued at least $40 million, he hesitated about the purchase, until he remembered a tip God gave him back in 1978, “I didn’t ask you to pay for it. I asked you to believe for it.” Duplantis took the divine message to mean ‘ask your flock to fork out for it.’

The evangelical preacher explained the need for a fourth private jet on his ‘This week with Jesse’ show, in which he stood next to framed pictures of his fleet of jets before pointing out that the aircraft he bought 12 years ago required refuelling, meaning he had to pay “exorbitant” refuelling costs.

The answer, according to Duplantis, is to get his followers to instead cover the exorbitant cost of purchasing a jet – specifically, a Dassault Falcon 7X, which costs about $54 million.

While the televangelist may claim divine inspiration was behind the jet idea, it appears more likely he may have coveted his neighbor’s possession, as fellow televangelist Kenneth Copeland bought himself a Gulfstream V jet in January.

The pair previously defended their need to fly privately, claiming commercial planes are simply filled with “a bunch of demons,” that will inconvenience them with prayer requests.

Duplantis won’t personally own the plane, he explained. It will be owned by Jesse Duplantis Ministries and when he dies, his successor will use it. While televangelists basking in great wealth gifted by loyal followers is nothing new, Duplantis’ request has invited particular disgust and mockery online.