Washington has a habit of bombing defenseless nations in the name of democracy, but isn’t the least bit squeamish about selling weapons and giving military aid to countries its own human rights watchdogs deem dictatorial.

Freedom House, a US-based non-governmental organization (NGO) set up in 1941, publishes an annual Freedom in the World report, which categorizes countries as either “free”, “partly free”, or “not free.” Funded almost entirely by the US government, Freedom House considers the US and its allies “free” while designated enemy countries such as Russia and China “not free.” The group’s 2018 report described 2.7 billion people living in 49 countries as tragically “not free.”

Yet of those 49 countries, at least 35 – or 71 percent  – have either been customers of the US military-industrial complex, or received some form of military assistance from the Pentagon over the previous three years.

‘Worst of the worst’

Back in September 2017, Rich Whitney of Truthout cross-referenced the Freedom House report and the Pentagon reports on US military assistance, and came to the stunning conclusion: despite the public proclamations about spreading democracy and opposing dictatorships, Washington has provided military assistance of some kind to 73 percent of the “not free” countries on the NGO’s list. Little has changed since then.

Twelve of those countries are so awful, according to Freedom House, that they have been dubbed “the worst of the worst.” Yet half of them – Saudi Arabia, Somalia, Turkmenistan, Uzbekistan, Central African Republic, and Libya – are ongoing recipients of US military aid.

Sure, Somalia has been ravaged by civil war, terrorism and clan strife since 1991, but the US keeps propping up the current central government, providing military assistance as well as “Make Somalia Great Again” hats.

The Central African Republic has been gripped by civil war between Christians and Muslims since 2012, and has a paltry 9/100 Freedom House ranking. A UN arms embargo has been in force since 2013. That has not stopped the US from delivering 48 vehicles to the CAR armed forces in August this year.

Libya is another case worth highlighting. In 2010, the North African nation was declared a “high human development” country by the United Nations, ranking 53rd out of 162 countries surveyed. The very next year, however, the country’s government was overthrown by US-and NATO-backed rebels. Seven years after being bombed into a moon crater and left to the tender mercies of warlords, tribal militias and even Islamic State (IS, formerly ISIS/ISIL), Libya has dropped to 108th place in the UN rankings, has a 9/100 score on the Freedom House index, and features open-air slave markets. On the other hand, the officially recognized government receives US military aid, so there’s that. 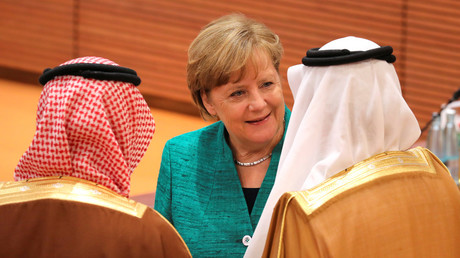 One of the worst-ranked countries on the Freedom House index is Saudi Arabia – with only 7/100 on the index, far below Washington’s favorite villains Venezuela (26), Russia (20) China (14), and even Iran (17), though not North Korea (3).

As the State Department put it last month, however, the Saudi kingdom is the US “largest foreign military sales (FMS) customer, with over $114 billion in active cases.” Foggy Bottom expects a “significant increase” in FMS due to the $110 billion agreement to modernize the Saudi armed forces, signed in May 2017 by US President Donald Trump and King Salman bin Abdulaziz Al Saud. So far, $14.5 billion in sales have been implemented under this initiative.

Despite the ongoing calls for sanctions against Riyadh over the murder of journalist Jamal Khashoggi in October, the Trump administration has been reluctant to interfere with the weapons sales.

That has not stopped Germany from halting weapons deliveries to Saudi Arabia, citing Khashoggi’s death. Saudi Arabia was Berlin’s second-best customer, after Algeria, with an estimated $457 million worth of contracts just this year.

Norway and Spain have also canceled Saudi arms contracts, but France, which has ongoing deals with Riyadh for almost $12 billion, is so far refusing to follow suit.