Democrats are railing against a Green congressional candidate in Ohio, whose votes almost equal the margin between the winning Republican candidate and the losing Democrat. The man, meanwhile, says his ancestors came from space.

The Green Party’s Joe Manchik scored 1,127 votes in Tuesday night’s special election in Ohio’s 12th congressional district. With most of the ballots counted, Republican candidate Troy Balderson holds a tenuous lead, a mere 1,754 votes ahead of Democrat Danny O’Connor. The difference is so small, that had Manchik’s votes gone to O’Connor, it would have been narrow enough to trigger a recount. Despite there being no apparent reason why that should’ve happened, Democrat supporters are now very upset with the Greens. 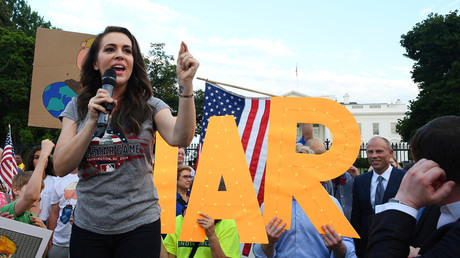 Manchik is a bit of an unorthodox candidate – he can’t remember the address of his own campaign website, for one. He says he is a descendant of aliens from the Pleiades star cluster, for another. The somewhat disheveled Manchik projects a noticeable hippie vibe, calling for an end to all wars and corporate dominance in US politics – an attitude that appeals to some amid all the uncertainty the country, and the world at large, is going through.

But those who root for one of America’s two major parties often dismiss third-party support as a “protest vote,” and the Democrats, in particular, seem to believe they are entitled to the votes of the Greens. They are also prone to blaming Russia for their losses – in case someone missed that – which inevitably leads to them labeling any marginally-successful Green candidate a Russian agent.

Just as in 2016 Jill Stein was blamed for drawing the “deserved” votes from Hillary Clinton, Manchik is now being blasted for stealing from O’Connor – either on his own, or at the Russians’ behest.

After last night’s too-close-to-call election results in #OH12, Twitter bots kept saying “so I guess you guys are taking a break from bashing Russia to bash the Green Party.” Actually, no.

Actress Alyssa Milano summed it up to her 3 million-odd followers, rolling both “protest vote” and “Russian meddling” in a single tweet. She received a few scathing replies, reminding her that it’s actually possible to have a political preference beyond the two-party system.

Uhhhh, maybe ‘cause they like the Green Party? Alyssa, I know it’s hard, hon, but try and keep up. 🙄

It’s not a protest vote. Greens and Libertarians are actual parties. We don’t owe our votes to the Ds and Rs. They don’t own us or this country.

There’s no such thing as “splitting the vote.” It’s been proven time and time again that Greens will not vote Democrat and will stay home if there is no Green candidate.

The Ohio special election is not yet a done deal – more than 5,000 absentee ballots and more than 3,000 provisional ballots won’t be counted until August 18. With margins like that, these numbers could yet turn the balance of power, or at least lead to a recount – something on which the Democrats are very much counting.