A White House spokesperson reportedly chastised staff for allowing an “unacceptable” comment about John McCain to be leaked to the press. A WH staffer had dismissed McCain’s opinion on the CIA pick, saying “He’s dying anyway.”

Sarah Sanders vented her anger at a meeting she convened on Friday, ABC reported, citing a number of WH officials. She described as “unacceptable” the comment made by White House staffer Kelly Sadler about the cancer diagnosis of Senator John McCain at a closed-door meeting on Thursday.

However, according to the staffers that were present on Friday, Sanders was more infuriated by the fact that Kelly’s insensitive words about the Arizona senator’s opinion on Trump’s CIA pick had been leaked to the media, rather than by the derogatory comment itself. 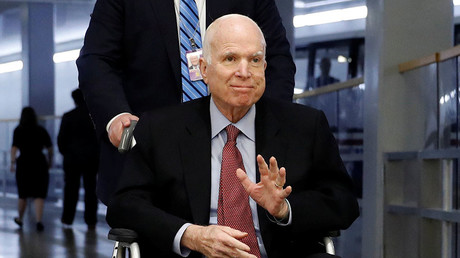 “I am sure this conversation is going to leak, too. And that’s just disgusting,” a visibly furious and upset Sanders told her staff at the Roosevelt Room of the White House, according to a source, leaked by Axios website.

According to reports, Sadler, who also attended the meeting, did not apologize. Moreover, at least one staffer, senior White House communications adviser Mercedes Schlapp, reportedly jumped to her defense, saying: “I stand with Kelly Sadler.”

On Thursday, in her bizarre comment dismissing McCain’s opposition to the nomination of Gina Haspel as the new CIA director, Kelly said that the senator’s take on the issue “doesn’t matter because he’s dying anyway.” McCain, 81, has been battling brain cancer and has reportedly made arrangements for his funeral.

The comment triggered widespread outrage among political opponents and allies of the senator. McCain’s wife, Cindy, has confronted Sadler on Twitter, with thousands of Twitter users expressing their support.

There’s been no public apology from Sadler as of yet. It was reported that Sadler did reach out to McCain’s daughter, Meghan, with an apology. However, the conversation apparently did not go smoothly, with McCain telling The View that she could not understand how Sadler was allowed to keep her job.

“The thing that surprises me most is… I don’t understand what kind of environment you’re working in when that would be acceptable and you can come to work the next day and still have a job,” she said on Thursday.

Meanwhile, the White House has so far dodged questions about Sadler’s remark, with Sanders saying she would not comment “on an internal staff meeting.” There has been no indication that Sadler might step down. Senior White House officials have told ABC that she still works in the Trump administration.