The defeat of Hillary, and the elevation of the vulgar Mr. Trump, loosed a fury of women against men in America that now verges on a kind of all-consuming chaos, like those western wildfires turning every product of human endeavor in the burn-path to smoke and ash. All the sorrows of our national life are assigned lately to the wicked white male patriarchy that must be defeated to usher in a satori of female sharing-and-caring.

A case in point is Sam Harris’s dialogue on his “Waking Up”(#141) podcast with Rebecca Traister of New York Magazine, author of the new book Good and Mad: The Revolutionary Power of Women’s Anger. (Click here for the Harris-Traister chat.) There is no better interlocutor of the current right-think about men and women than Ms. Traister. She puts it across as though her brain was shot out of a cannon from a graduate seminar on “Engendering the Intellectual Space” as if there are no other points at issue in our national life than the power valences between the two sexes — and, of course, even suggesting that the human mammal comprises two sexes is a punishable offense these days.

To get a sense of the true chaos behind her argument, just have a look at the cover of Good and Mad. Notice that the blood-red title stands against a gray field of the word “F*UK” (asterisk hers) repeated 120 times on a 5 X 24 grid. Deconstruct that. Is it the generative act of copulation itself that she is inveighing against? Should it be gotten rid of? Will that solve the problems of a foundering hyper-complex industrial society? 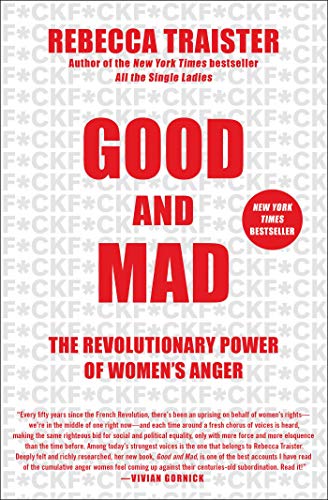 Ms. Traister might have used the word “power” five hundred times in her…