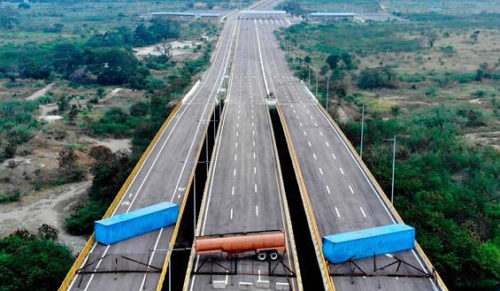 Ven tanker at the border

The first trucks carrying the so called humanitarian aid for Venezuela have arrived at the Colombian border city of Cúcuta where a standoff is taking place after the Venezuelan government closed the border and blocked the highway with shipping containers and a fuel truck.

Together the European Union and the United States plan to send $60 million in aid, despite the fact that the Venezuelan government is demanding the return of more than $23 billion dollars frozen in accounts being held in the U.S., Canada and Europe that they consider stolen from their public treasury; money that could have been spent on the necessary import of food and medicine for the benefit of the entire population.

The sending of “humanitarian aid” to Venezuela by the U.S. is being presented as an emergency and something humane and necessary to the international community; however, the Bolivarian government of President Nicolás Maduro has made it clear that if their concern was genuine they would  unblock the funds that the world’s financial system have damned up.

The self proclaimed U.S. picked, wannabe, “president in charge”, Juan Guaidó and his group in charge of carrying out a coup d’état against the administration of President Maduro would claim the “humanitarian aid” the U.S. plans to send. Clearly this aid has nothing to do with the suffering of the Venezuelan people and everything to do with turning up the heat of the regime change…