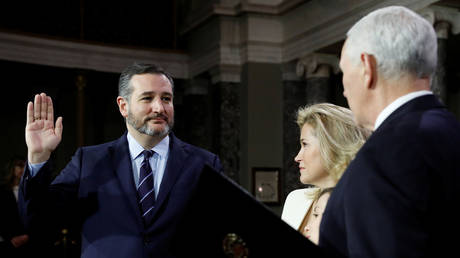 Senator Ted Cruz says an unidentified rabbi in Israel thinks his beard could “put the fear of the Lord in Israel’s enemies and promote Middle East peace.” The internet reacted accordingly.

A flattered Cruz shared the incredible compliment on Twitter Wednesday, humbly acknowledging that while the praise was “pretty cool”, it might be “a bit much”, to which the internet collectively replied: “Ya think?” In GIF form, of course.

Pretty cool: A good friend is studying in Yeshiva in Israel. His rabbi told him he liked my beard, elaborating “It gives Cruz a Talmudic & Rabbinic look & presence that will put the fear of the Lord into Israel’s enemies & promote Middle East peace.” Wow. Perhaps a bit much….

That word he used “Schmuck” – it does not mean what you think it means.

More than a few skeptics appeared to doubt the quote (that almost certainly came from a real rabbi of an unknown person studying in Israel that really is good friends with the Texas senator), and it remains to be seen if the Texan’s facial hair truly can overcome deeply-rooted divisions.

READ MORE: Bolton to Netanyahu: We have the best US-Israel relations in history