No War In Syria demonstration 2013 in Los Angeles, CA (Photograph by David Mcnew for Getty)

The US war against Syria was one that people almost stopped. President Obama was unable to get Congress to authorize the war in 2013, but the Pentagon and foreign policy establishment, who have long wanted to control Syria, pushed forward with war anyway.

The people were right, and the military was wrong. The war on Syria never should have happened and now must end.

President Trump announced withdrawal from Syria this week. This creates an opportunity to end the war on Syria. We have work to do to make peace a reality. 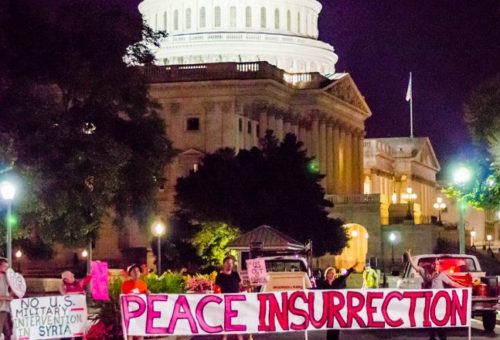 The People Almost Prevented the US War in Syria

In 2013, amidst highly-doubted, unproven allegations of a chemical attack by Syrian President Assad (debunked a year later), the threat of war escalated, and so did opposition to the war. Protests against an attack on Syria took place around the world. In the US, people were in the streets and speaking out at town halls. Obama was forced to bring the issue to Congress for authorization.

Congress was barraged with a Peace Insurrection encamped outside its doors, sit-ins in Congressional offices, and a massive number of phone calls…